Cristiano Ronaldo who currently plays for reigning Italian champions Juventus has jokingly told American boxing legend Floyd Mayweather to give him one of his car which is Bugatti.

Floyd Mayweather is one of the most successful athletes in the world considering the money the American has made and still making despite not fighting again.

Since Mayweather retired from boxing, there have been calls for the American to make a return to the ring, but he has not yet made any public declaration on his intention.

However, Floyd Mayweather is so blessed that he has mansions around in America and other parts of the world, he has many cars for himself and also his children.

To crown it all, Floyd Mayweather also has a private jet which he takes to anywhere in the world he feel like traveling to.

The 43-year-old took to his official Instagram page to show his fans the number of his cars and was asking the one he should take out on Friday night.

In his garage, Floyd Mayweather showed his fans four Ferraris asking them which one he should take out.

Cristiano Ronaldo however spotted the post and told Floyd Mayweather to give him the Bugatti.

Cristiano Ronaldo jokingly tells Mayweather to give him Bugatti among his cars
Source: Instagram

Cristiano Ronaldo is also among the richest footballers in the world considering what he has made since playing for Sporting Lisbon, Manchester United, Real Madrid and now Juventus. 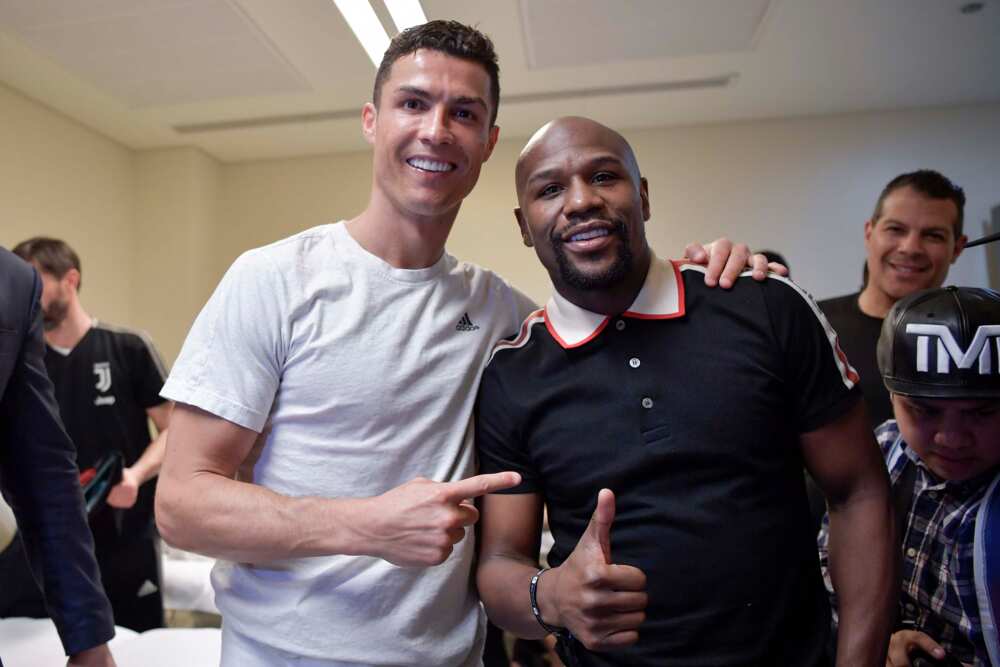 Cristiano Ronaldo jokingly tells Mayweather to give him Bugatti among his cars.
Photo by Daniele Badolato
Source: Getty Images

Earlier, Bioreports had reported how Cristiano Ronaldo who recently tested positive for coronavirus took time to share inspiring message with his followers on social media.

The Juventus striker has returned to his base, Turin, having left the Portuguese national team a few days back after he was confirmed carrying the virus.

The-33-year-old is the only player from the team that returned positive result and he is now on ten day self-isolation.

Recall that he could only watch from an isolated apartment during Portugal’s UEFA Nations League clash with Sweden on Wednesday night, October 14.

The team captain tested positive for coronavirus about 24 hours earlier after another round of tests were conducted on all players in line with the UEFA guidelines in containing the spread.

By Bolaji Ogundele, Abuja President Muhammadu Buhari will make a nationwide broadcast this evening (Thursday) at 7pm, to address developments...