– Juventus are now one point behind Serie A leaders AC Milan

Cristiano Ronaldo is now officially the fourth highest goal scorer in the history of football after netting a brace in Juventus 2-0 win against Cagliari, Caughtoffside reports.

The 35-year-old opened the scoring for Juventus in the 38th minute after taking a touch to set himself on his right foot and rifled a powerful shot inside the far post. 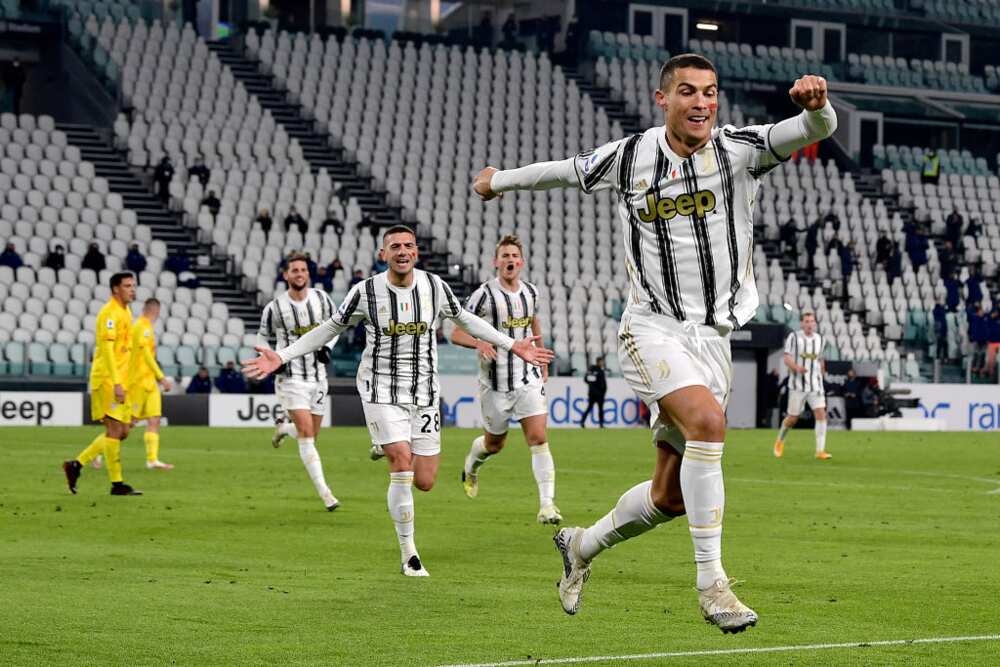 Four minutes later, it was 2-0 courtesy the same man Ronaldo as he bagged his second goal of the night.

Those two goals have now seen Ronaldo move up in the all-time goal scoring rankings.

Ronaldo’s first goal against Cagliari saw him pass Ferenc Puskas’ tally of 746 career goals, with the Portuguese now having scored 748 after scoring his second against the Italian club.

If you combine Ronaldo’s 102 finishes on the international stage with Portugal to his club career tally of 646 goals with Sporting Lisbon, Manchester United, Real and Juventus, you arrive at a total of 746 goals for him.

However, Ronaldo still trails Romario who is third with 750 goals and the legendary Pele who scored a total of 767 official goals for club and country.

Here are the top 10 goal scorers in history of football:

Earlier, Bioreports reported that Juventus vs Cagliari saw another spectacular show from Cristiano Ronaldo who despite being 35 years, produced two great goals to win the tie for his side.

Juventus are now one point behind Serie A leaders AC Milan after their victory.

Ronaldo is the only Juventus’ player to have found the net in each of his first five Serie A seasonal appearances in the three points for a win era since 1994/95.

COVID-19: Nigeria Slips Into Another Recession

Tony Ogunlowo SIR: We saw how the revolution led by the late Jerry Rawlings in the early eighties cleaned up...