Remember boy who couldn’t go to school because his parents died? Nigerians have donated money for his education (see photos)

– Sharing an update on the kid’s life after his video calling for help went viral, @AnatuGreen said it has been five years without education

– @AnatuGreen, the man who brought his matter to Twitter, however, called for more Nigerians to donate towards his welfare

Nigerians have risen up for the cause of Ashamu Lekan whose video went viral days ago after he was filmed repairing a tricycle.

In the said clip, the boy who turned mechanic and dropped out of school said if he had a helper, he would like to continue his education.

Days after, a good Samaritan with the Twitter handle @AnatuGreen coordinated donations from willing Nigerians so the young kid can live his dream.

On Thursday, December 3, @AnatuGreen said with the help of many, Lekan has resumed at BrainField School, Abule Egba in Lagos state.

The man added that it would be the first time in five years that the young Nigerian would be stepping foot into a school. 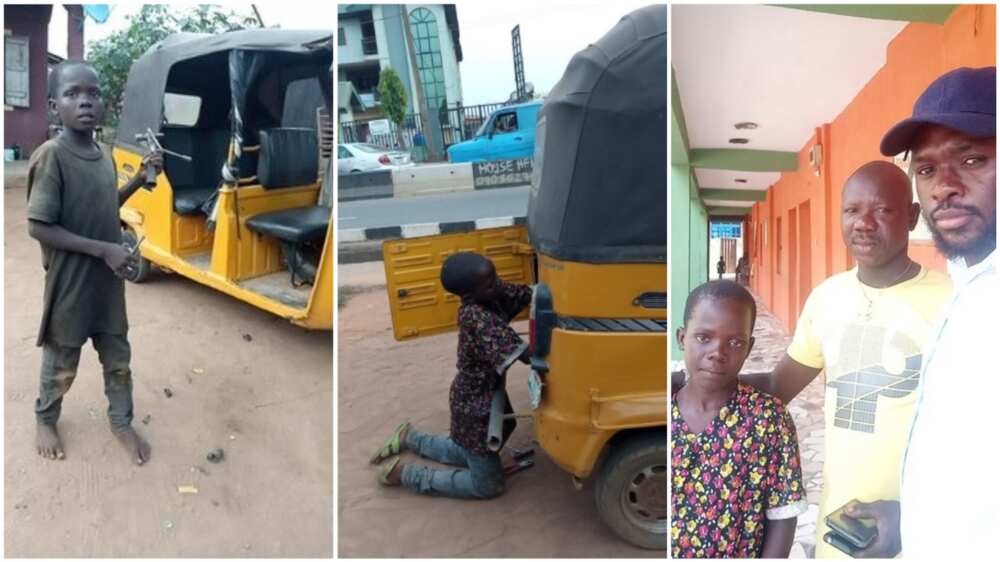 Kind Nigerians have helped and Ashamu Lekan is back to school after five years.
Photo source: @AnatuGreen
Source: Twitter

Sharing photos on Twitter, the man posed with the kid and one other unnamed person as they sat in an office of the school Lekan will be attending.

See his tweets below:

In other news, a Nigerian woman, Fade Ogunro, gave hope to a young boy identified as Anthony Mmesoma Madu whose dancing video went viral many months ago.

In the video that was watched millions of times, the boy could be seen making amazing lines in the rain on a very wet floor.

HEART OF GOLD: Williams gets sponsor for varsity education | Bioreports

What were you expecting? – Social media reacts as man shares photo of yam and beans with sachet water hotel in Ibadan served him after paying N10k per night

What were you expecting? - Social media reacts as man shares photo of yam and beans with sachet water hotel in Ibadan served him after paying N10k per night