41 seconds ago by
Taiwo Owolawi

– Nollywood actress, Regina Daniels, recently took to social media to show off her birthday gift from her husband

Nollywood actress, Regina Daniels, was recently spoiled by her husband with lavish gifts for her 20th birthday.

The film star clocked a year older on October 10, 2020, and a week later, her husband was still spoiling her with expensive and mouth-watering gifts.

Regina recently took to her Instagram page to show off her recent birthday gift. The actress said that her billionaire hubby, Ned Nwoko, bought her a ‘four-wheeled plane’. The celeb described her luxury new vehicle this way seeing as the interior looked like that of a private jet with enough leg space.

The film star also shared series of videos of herself jamming to hit songs in her new ride. 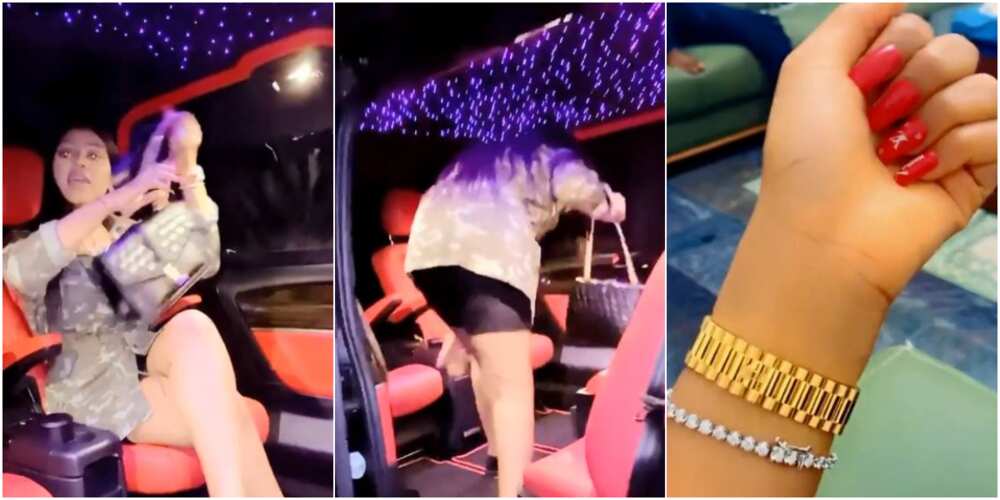 Regina Daniels said that her husband bought her a ‘four-wheeled plane’ after buying her a N24m wristwatch for her birthday.
Photos: @regina.daniels / IG.
Source: Instagram

In the caption, Regina added that the ‘four-wheeled plane’ was in addition to her husband buying her a N24 million wristwatch. She also continued that she was going to flaunt the gifts because they were hers.

“Meet my four wheel plane…..Also a birthday present from hubby alongside my 24million Naira watch…..Love you baby ❤️❤️ u are so extra.”

The mother of one got a grand surprise from friends and family, in celebration of her birthday. As it is the usual practice, the actress was caught unaware of the surprise package.

Regina was also celebrated by her mother, Rita Daniels, who took to her Instagram handle where she shared a photo of her daughter carrying her grandson. She wrote a beautiful calling the young mum her pride, her forever 16 among other sweet words.

Tinubu to youths: you made your points, let protests end