– According to Twitter user, Onyeoma Bold who shared the post, the student was going to use it as a sitting stool

A viral photo of a student spotted going to school with a kerosene stove frame to be used as a chair in class has sparked outrage online. 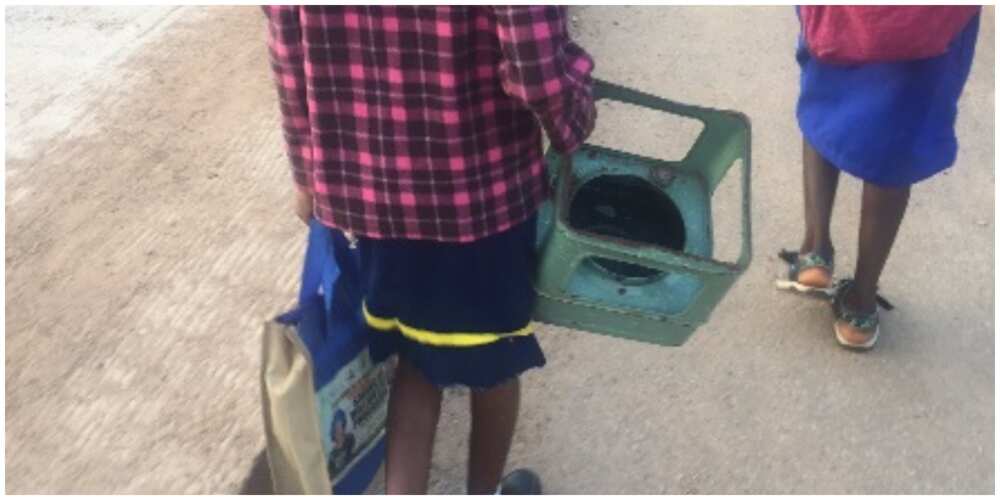 Twitter user, Onyeoma Bold, shared the photo of the student whose back is to the camera as she walks to school.

“While running this morning I saw this child going to school with this as sitting stool, this is 2020 and this can’t be happening!! Pouting face#EndSARS #EndBadGovernanceinNIGERIA”

Meanwhile, as the anti-SARS protest march continues across the nation, many interesting stories have surfaced online.

One of such stories is that of a young boy who was hawking snacks at one of the protest grounds. However, after giving his snacks to some protesters, he refused to collect money from them.

His response after rejecting their money was ‘ẹ bawa ṣe kín lè lọ ile iwe’ which a Twitter user translated as ‘Do it for us so that I can go to school’.

In other news, today, Tuesday, October 20 is a big day for popular Nigerian singer, David Adeleke as it marks the first year anniversary of when he began a dad for the third time and to a baby boy.

The singer took to his social media pages to celebrate his son, Ifeanyi, who clocked a year old and fans have joined in the online celebration.

Only recently, the singer was accompanied to work by his eldest daughter, Imade. The music star is no doubt a celebrity who shows great love to all his three children despite not having relationships with some of their mothers.