– According to Temmie, saying hello or hi to a lady in her DM should cost men some dollars

It all started when some of the singer’s male admirers took to her inbox to try to get her attention.

Obviously not impressed by the audacity of their demands, Temmie took to her Instagram story to react to the situation.

According to her, she is not receiving enough credit alerts from men in her DMs for the time they are taking from her by attending to their messages.

In her rant, Temmie continued that if the people in her inbox are not ready to send her money, they should not stress her.

The music star also said that she is a firm believer that black women should be paid just for existing. She added that saying ‘hello’ and ‘hi’ to a lady in her DM should cost men some dollars. 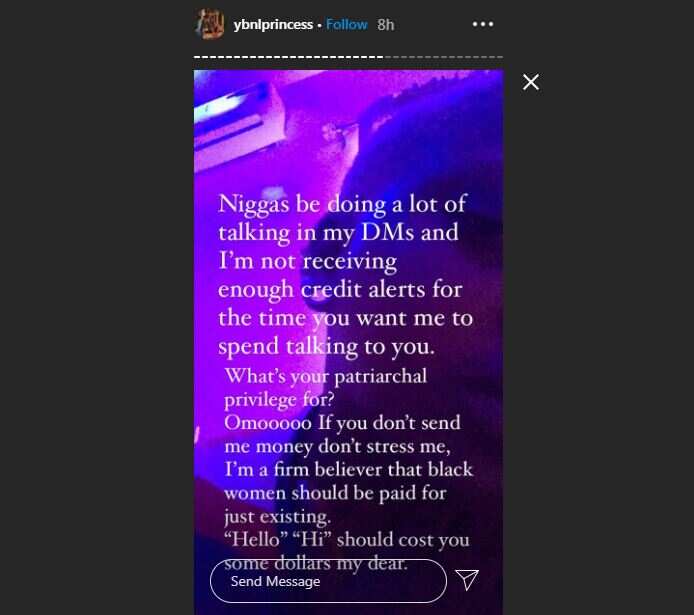 Singer Temmie Ovwasa reacted after she had series of messages from her admirers.
Photo: @ybnlprincess
Source: Instagram

As expected, the post generated series of interesting reactions on social media.

I disagree, who should pay you for existing? God wey create you, how much did he collect?

Smh, hopefully this one will have sense one day. Someone should pay you for existing? Na them born you?

Where is the lie.

In other music news, Bioreports reported that music star, Davido, splurged on expensive jewelry for one of his daughters, Hailey Adeleke.

Just recently, his official jeweller, Ice Box, posted a video showing the moment the singer and his crew stormed their Atlanta store to make some major purchases.

Our Reporter The Department of Agricultural and Environmental Engineering, Faculty of Technology, Obafemi Awolowo University (OAU), Ile-Ife is set to...