– Nollywood actress, Destiny Etiko, recently buried her father after he passed on at the age of 70

– Controversial Nigerian prophet, Odumeje, was at the burial and he made his presence felt

Popular Nigerian actress, Destiny Etiko, recently laid her father to rest months after his demise and controversial man of God, Prophet Odumeje, got people buzzing after spraying her the sum of N1 million.

Preachers in many parts of the world are known to act a certain way but not Nigerian pastor, Odumeje, who has become a sensation on social media for his unconventional ways.

The man of God who enjoys getting people talking did not disappoint as he attended Destiny Etiko’s father’s burial and sprayed clean N500 notes. It was said that the pastor eventually sprayed the actress a million. 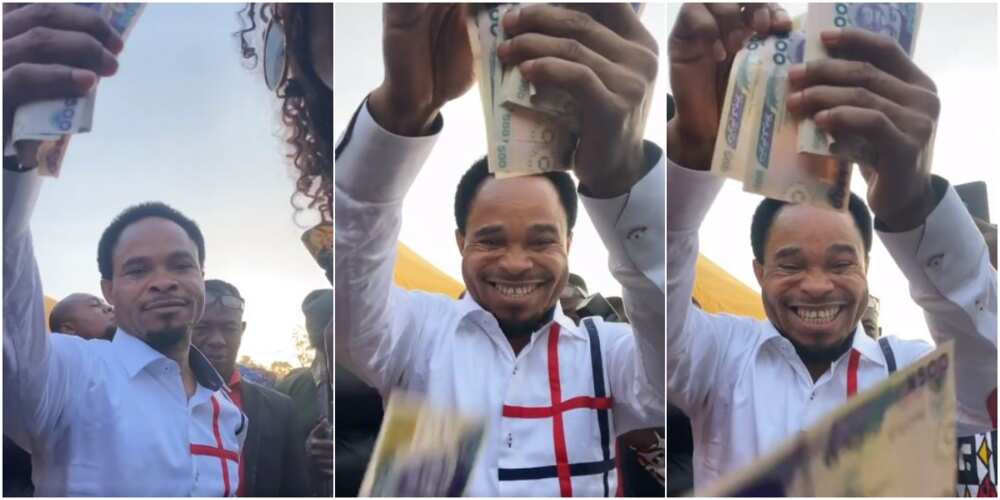 The film star took to her Instagram page to share the video as she hailed the prophet as her daddy.

According to her, her daddy stopped the show for her as usual by spraying N1 million cash.

In the video posted, Odumeje was surrounded by a crowd who continued to hail him as he dropped the clean naira notes. The hailing seemed to ginger the preacher to keep up the spraying.

In the caption of the video, Etiko wrote:

“And daddy stopped the show for me as usual 1m cash

As expected, the video which later went viral had people buzzing. Read what some of them had to say below:

You see that woman hailing and gingering him, people like that can make you spray all your money.

If only God could give some of these “prophets” resetting slaps. Smhh.

Igbooooo peopleeeee na then be the real pepper them gang.

In related news, . had earlier reported that Prophet Odumeje revealed the source of his money and his power.

Odumeje who is also known as the Lion himself, the Indaboski or the Liquid Metal, gained the attention of people due to his interesting style of preaching. Some people have even likened his church service to a WWE ring as he sounds like a talented commentator.

In a video that surfaced on social media, the preacher spoke on the source of his money and power.

According to Odumeje, if you serve a true living God, He will give you money. He also said that God is a rich God and he made Solomon rich.

Nigerian Pastor Reveals How He Got the Gift of Prophecy at a Young Age | .

Everything you need to know about Pina Colada...

Why I’m Not Selling Spotify After a Disappointing...

5 good movies on Netflix to watch this...