– The watch is made by Richard Millie and it costs N58m

Although Nigerian singer Davido has clarified a statement in one of his songs about having N30bn in his account, there is no denying that the father of three has enough money to buy the luxury things of life.

And on many occasions, he has been spotted in stores of various luxury brands splashing millions of naira on things as little as diamond earrings for his daughter Hailey.

According to the blog, the watch is by a Swiss luxury watchmaking brand called Richard Millie. While some celebrities have been called out for wearing a fake, the Instagram blog attests to Davido’s watch to be original. 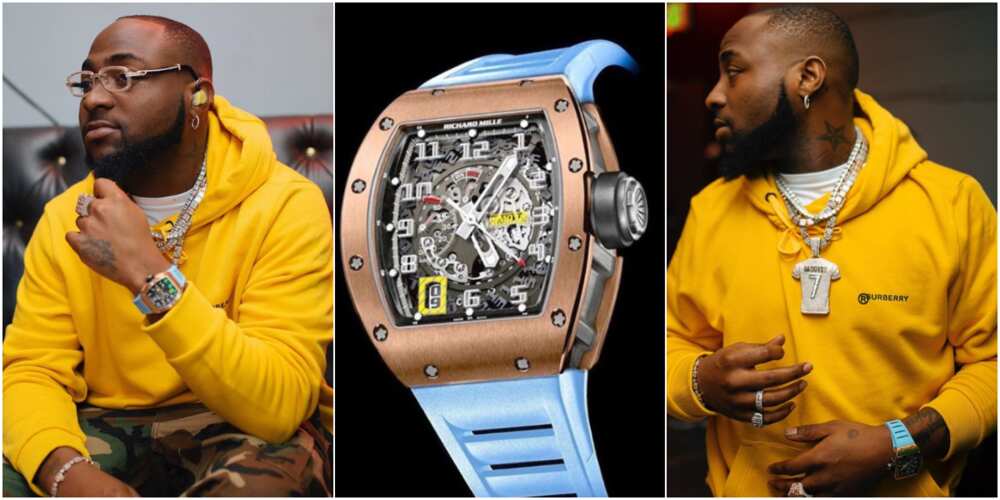 Luxury Life revealed that the watch worn by the father of three displays the hours, minutes, seconds, date, and power reserve.

“@davidoofficial wears aRM030 Automatic in rose gold and titanium with a light blue strap. It features the classic tonneau-shaped case with a self-winding automatic skeletonized movement displaying hours, minutes, seconds, date, and power reserve,” the caption of the photo read.

The blog went on to state that the watch costs between N46m to N58m.

Davido took to the comment section of the blog and replied to the review.

He said: “Never capped on God.”

As expected, Nigerians had something to say as many took to the comment section to react.

Many hailed the singer while some used that opportunity to take a jab at celebrities who wear fakes.

moe.diva: “Man is wearing people’s houses on his wrist.”

nno__cap: “Who is that guy that bought a fake Richard mille for his manager again sef.”

Just recently, Bioreports reported that Davido reacted to the news that billionaire Femi Otedola bought a Ferrari for each of his three daughters.

The singer was impressed and expressed his desire to be able to do the same for his daughters.

I am not jealous of Davido – B Red | Bioreports

Nothing wrong in what I said, TBoss says after getting trolled for saying Ozo shouldn't share his car with Nengi

By Taofik Salako, Deputy Group Business Editor Stunned by the decision of the Central Bank of Nigeria (CBN) to cut the...

Labour’s mobilisation for strike at climax

Edo: Cutting off the nose to spite the face

For new rhythm in Plateau