– It seemed as though the gentleman had just proposed to his lover as there was a placard nearby with the inscription, “marry me”

A gentleman whose name is not disclosed has been captured on camera stealing glances at another beautiful lady in a restaurant whilst his lover was busily feeding him.

In the post that was shared by a Twitter user identified with the handle @baddestcash_, it appeared as though the gentleman completely got absent-minded as he was spotted with a fixed gaze on the lady at three different moments.

Right on the table with the man’s lover was a placard with the inscription, “Marry Me” which suggests that he had just proposed love to his lady before eyeing the other one. 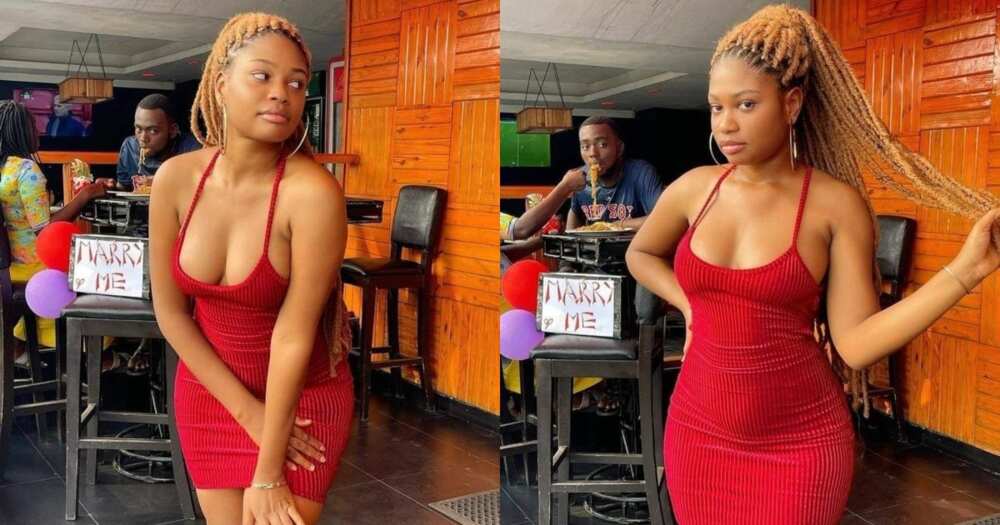 Man caught on camera eyeing another beautiful lady whilst his lover was feeding him
Credit: @baddestcash
.

The thread of photos got many social media users talking.

Check out some of the top comments below:

The adrenaline must be pumping very fast to not concentrate anymore. The image in his front is the cause of it.

You people should please not spoil the beautiful relationship for the lady. She dey feed the werey, him still dey focus on another girl

Meanwhile, Bioreports had earlier reported how social media users reacted after a man was caught sleeping behind the wheel of a moving car.

A Twitter user identified as Seth Blake, had shared a video his girlfriend made of a man who appeared to be asleep behind the wheels of his moving car with the caption: “Dude is straight snoozing going 75mph on the interstate, letting his @Tesla do the work.