Young lady turns down opportunities to move to US, France, Germany, Canada, her reason sparks reactions

Young lady celebrates US citizenship, many react as she shares adorable photo

It is not new to see partners in marriages asking for help from one another, what is uncommon is the professional touch to it by some people and that is the case of a brand influencer identified as @irizzzy_ on Twitter.

The lady got people talking after she revealed that to get money from her husband for her new business, she has to present a proposal. 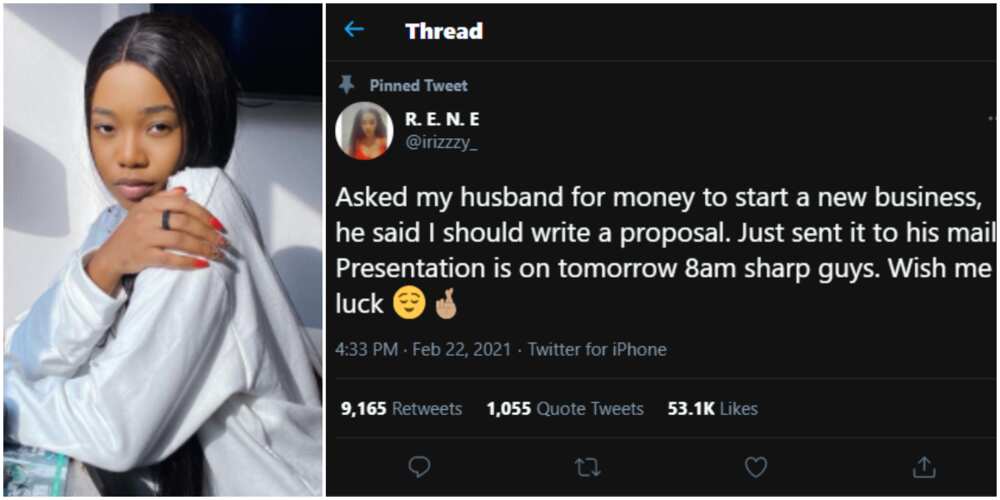 Lady asks people to wish her luck as she defends business proposal before her husband.
Photo credit: @irizzzy
Source: Twitter

The young lady also continued by saying that she already sent it to his mail and had to defend it the next day, to which she asked her followers to wish her luck.

“Asked my husband for money to start a new business, he said I should write a proposal. Just sent it to his mail. Presentation is on tomorrow at 8am sharp guys. Wish me luck.”

Nigerians took to the comment section with different reactions to the tweet, while some gave her helpful tips, others shared their experiences in similar situations.

“My own father is asking for a guarantor before he gives me a loan.”

“I remember when my boyfriend employed me as his personal assistant and told me no sentiment will be attached, I thought he was joking, when I was supposed to work I was busy discussing something else, baba fired me immediately and employ a receptionist the next day.”

“I once told one babe that I was dating to write a proposal and the girl legit got angry o. That why will she write a proposal?? I told her that you either write it or forget about the money.”

“In closing your presentation, just say ‘We have other investors, but we are giving you the right of first refusal as of special investor before we consider what the other investors are asking for’.”

“Very impressed by the two of you. I like how you are taking it seriously. I bet he’s already mentally given you the money. The proposal & presentation are to make sure you are really into it and you have a complete grip on your vision. Expect him to give tips here and there.”

In other news, Bioreports earlier reported that in an attempt to celebrate her relationship with her husband, a lady has caused a massive stir on social media.

The lady known as Olayinka Oyetunji took to Linkedln to recount how she met her hubby.

Her husband identified as Toyosi Oyetunji, according to her, wasn’t financially stable when their relationship kick-started 20 years ago.

Olayinka said she remained in the relationship because she saw that her husband had the willpower and determination for success.