A young lady is in celebration mood as she got a new status now. The excited young lady took to Twitter to show off the beautiful whip she got herself on Saturday, February 13.

@QueenGifti while sharing a photo of the fine ride along with its key described herself as a member of the Audi gang. 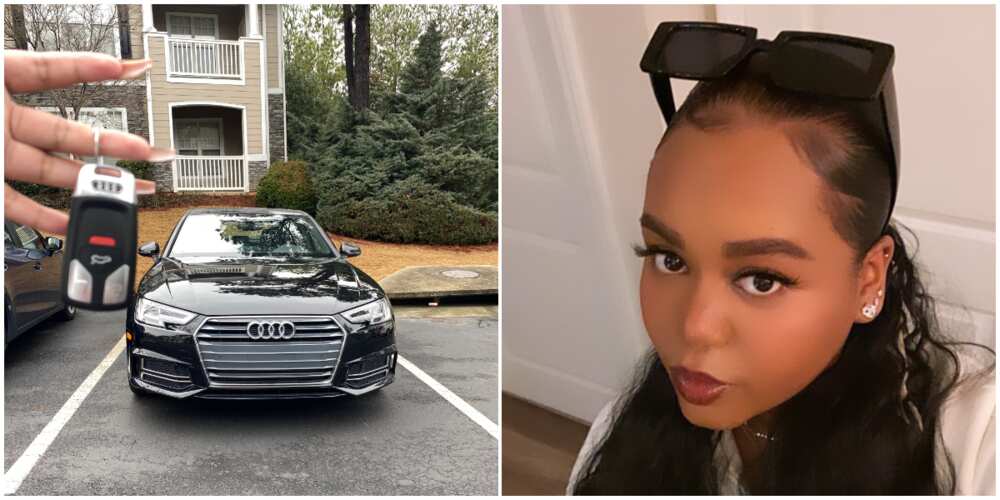 The car she bought herself is not a regular ride. It is an Audi A7 that costs around $69,200 (N26 million), according to Car Buzz.

Her gift caused some commotion on Twitter, with the post already getting over 54,000 love reactions and many comments.

Car lovers commended her choice of the beautiful ride, others welcomed her to ‘the Audi gang.’

Below are some of the reactions as seen by Bioreports:

“You got yourself a beast there please remember me after 10years when you selling it….I tell my fellow Zimbabweans I bought a recent import new shape …exactly 10yrs yr highness that’s when I will afford it!”

“Right now praying for ability to afford buying that phone on your pp….but my vision and hope in my GOD tells me I can achieve anything through Christ who strengthens me. I will own such a fleat of classy cars in Jesus Name!Because He Blesses and Transforms situations.”

“Congrats on the new ride.

“With an Audi, you’ve got the best lights in your neighbourhood.

“Get an Audi today.

“Audi gang is the bomb.”

Meanwhile, Bioreports earlier reported how a young Nigerian riled many up after sharing the photos of the new car she recently bought.

In a Twitter post on Monday, January 18, the lady shared three photos showing her posing with the car which was designed in ribbons as a mark of celebration.

While many congratulated her, there were some who wanted to know her source of wealth as they insinuated that she may not have bought it with her money.