– Seven points are currently separating the two teams, with City sitting top with a game to play

– Liverpool and Chelsea have been tipped to completed the top four slots, with Leicester missing out by a point

Man City have been backed to reclaim the Premier League title at the end of the 2020/21 season according to latest projections by CIES Football Observatory.

City look set to have taken control of the title race as they currently top the charts with 53 points with a game in hand.

The tally places them seven points above rivals United who sit second after a recent slump in form. 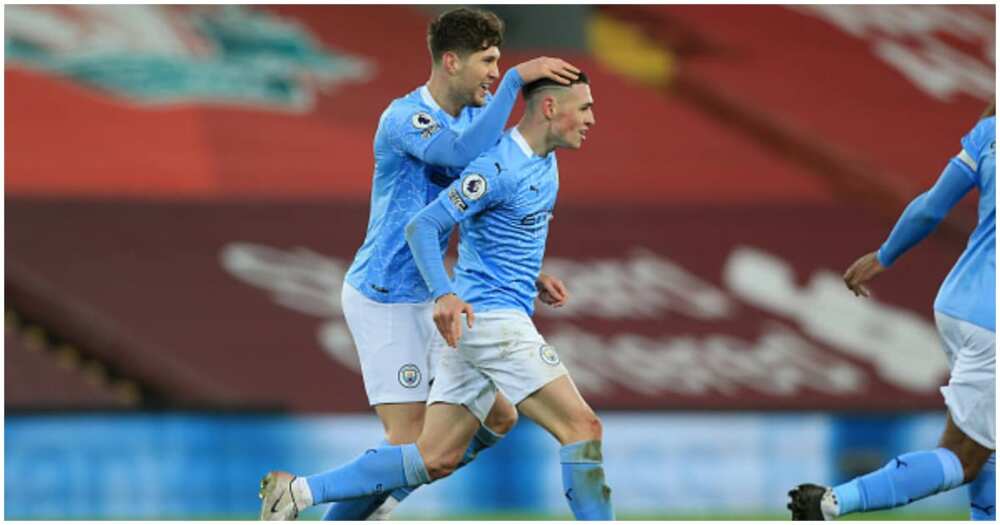 Man City have been projected to beat rivals United to the Premier League title by 14 points. Photo by Simon Stacpoole.
Source: Getty Images

According to CIES Football Observatory’s findings, Pep Guardiola’s men are expected to continue their impressive form and subsequently cart home the domestic title by 14 points.

The projection contends United will seal a second place finish ahead of struggling Liverpool, with Chelsea, who broke into the top four on Monday night, February 15, earning the last Champions League place.

Should the projection that the Reds will finish on 69 points, the Anfield outfit would have dropped a massive 30 points from their tally of 99 that saw them lift the title.

CIES’s latest prediction has a couple of surprises through the top 10, with Leicester, who are currently placed third given no chance to play in Europe’s elite football competition next season.

Instead, the Foxes have once again been backed to drop out and finish fifth, by the slimmest of margins of just a point.

A party is not expected to take place in north London, with Tottenham Hotspur and Arsenal given no chance to qualify for any European competition.

Spurs are fancied to finish ninth at the end of the season, while the Gunners would fail to make the top 10 for the first time in 26 years.

In the relegation dogfight, Fulham have been projected to survive the drop at 17th, with Burnley, West Brom and Sheffield United all being relegated to Championship.

CIES’s prediction is based on a statistical model that takes into consideration a number of factors including shots on target, shots conceded to the opposition and ball possession.

Below is CIES’s projection of the final 2020/21 Premier League table:

Meanwhile, Bioreports earlier reported that Chelsea have moved into the top four of the Premier League standings following their 2-0 victory over Newcastle United on Monday night, February 15.

Chelsea boss Thomas Tuchel has now won five of his six games since he arrived at the Stamford Bridge club, and the game against Newcastle was a rather easy one.