– A lady identified as Princess on Twitter on Wednesday, September 16, shared her pre-wedding photoshoots on social media

– In the post, she said that her soulmate has indeed found her as many rushed to congratulate her

A Nigerian lady with the Twitter name Princess has shared pictures of her pre-wedding photoshoots.

The happy lady in all excitement said that her soulmate found her as she attached emotional emojis to her tweets on Wednesday, September 16.

The first frame showed the man on a kneel as he asked the lady to marry him with Princess putting her hand over her mouth in utter surprise.

Other pictures in her tweets reflect several shades of excitement. See her tweet below:

As at the time of compiling this report, the post has thousand of retweets with almost 30,000 likes. Many were in the comment section to reflect on their single status as others congratulates the soon-to-be husband and wife.

See how people reacted below:

@penielsz said: “Congrats dear but for me getting married scares me what if I get tired of the person”

@theyoghurtgirl said: “Congratulations. Going to the office used to be my only outings. I’m at zero outing level now since working from home. How I wan meet soulmate inside this house” 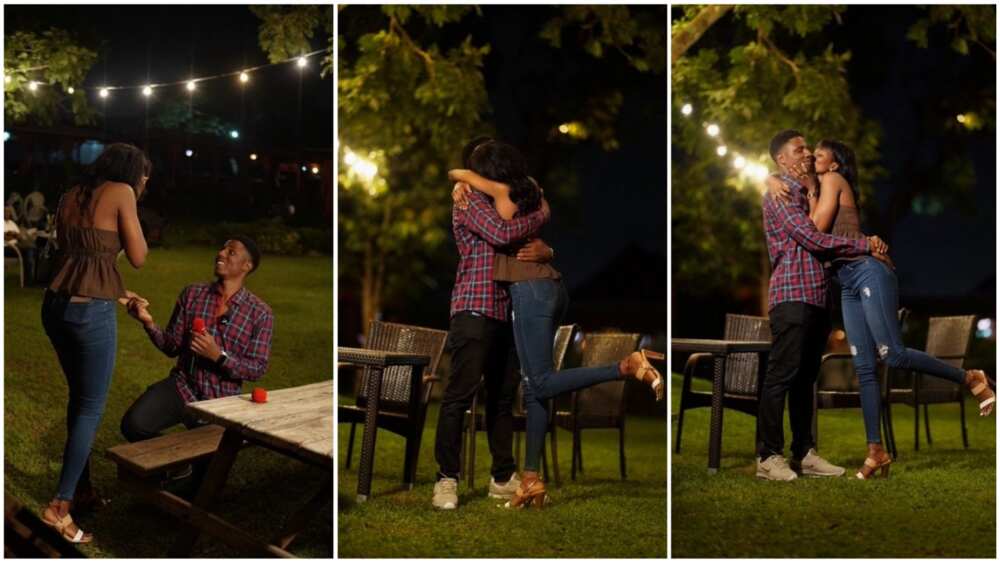 Meanwhile, Bioreports earlier reported that a bride, named Titi, did not only have a big wedding celebration but got the greatest love from her mother.

On her wedding day, dressed in a beautiful white gown with people present, her mom hugged her and presented a car gift.

Everybody kept screaming Jesus in amazement as they saw the car. Titi, stupified beyond words, kept walking slowly to her mother.

In a moment that would make anyone’s head swell, the mother said that the daughter has been very loyal in serving God with her.

As the lady cried, going down on her knees in appreciation, the mother said there was no need for that as giving her the car was the least she could do to reward her uprightness.

Before handing over the keys to them, she, therefore, asked both the groom and the bride to bring their hands as she placed the key in their palms.