– According to the police officer, he rescued the baby from a pit latrine on September 9, 2019, and felt the urge to celebrate the girl

– Gabriel Akwaru said he organised a small party for the girl which turned out to be a big one with friends.

– The officer based at Tigoni said the baby’s mum is mentally unstable and has been under the care of her ageing mum, together with the little girl

Many Kenyans have the notion that most police officers can only help when there is bribe, but that is not the case with Gabriel Akwaru.

Akwaru who is stationed at Manjiri Police Post in Togoni has been a blessing to a baby who was dumped in a pit latrine on September 9, 2019. Police officer Gabriel Akwaru at the center during the baby’s birthday.
Source: Original

A year after rescuing the baby, the kind cop decided to commemorate the day with a special birthday party for the little baby.

“The baby has been living with the grandmother and the mum who is mentally unstable. Since I rescued the baby on September 9, 2019, I wanted us to remember the day and thus the birthday party. I was busy on September 9 and so I organised something small for the girl on Sunday, September 13. We went there with my friends and had a big cake, bale of flour and contributions amounting to KSh 12,500,” he told TUKO.co.ke.

According to Akwaru, he received a call from villagers that a baby had been thrown into a pit latrine. Akwaru and his colleagues PC Kimeu and Mwenda had to do all they could to save the little girl.

He recounted how after pulling the baby from the latrine people ran away and was left to tend for the baby himself.

“When we removed the baby from the latrine, people ran away and were now watching from a distance. I gave her first aid to ensure that there was no waste from the latrine in her mouth. I wrapped her in my jacket and took her to Tigoni Hospital where she was put on a ventilator. I would go there to check and God is good she turned out to be okay,” said Akwaru. 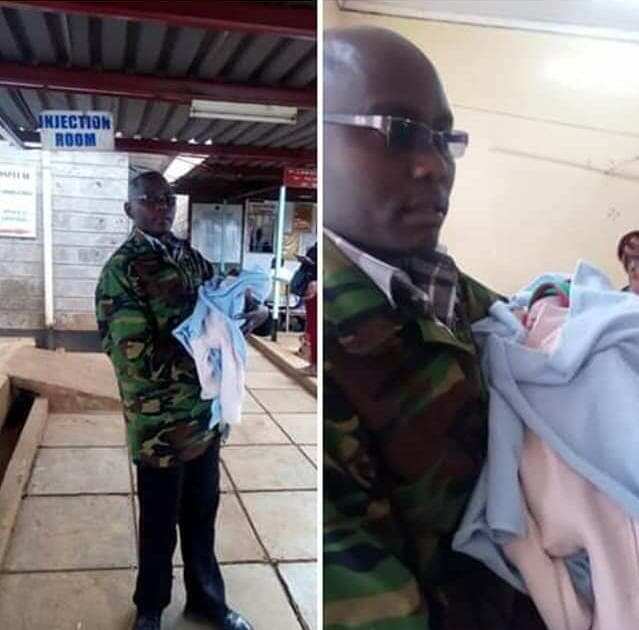 Gabriel Akwaru with the baby after rescuing her from the pit latrine. Photo: Joseph Sonko Junior.
.

Akwaru said that the mother of the baby is not mentally stable and was depressed after she was chased by her husband.

“The mum threw the baby into the pit latrine and then run away to the forest. She is mentally unstable and even has a letter from Mathare Hospital. She was depressed after she was chased by her hubby. She has other children,” said the kind police officer.

According to the kind man, the children’s officers intervened and the lady and the baby went home under the care of her ageing mum.

“After the bay recovered, the children’s department was involved. The baby was given back to the mother. The thing is that she and the child were put under her ageing mum. I always pass there to see the child and support where I can. Even if I go on transfer, I will always visit the kid. I will come here with my wife. I take this child as my own,” added the officer.

In other news, a Johannesburg Metro Police Officer is being lauded for delivering a baby on a pavement.

Rose Sithole has been an officer for the past 13 years and has never delivered a baby before. The incident occurred on Thursday, September 17.