The police have said that tatoos do not make people irresponsible in as much as they can express and explain themselves in a modest way.

She spoke at a session with the theme ‘Social Media Wars-Dreads, Tattoos and Password’.

Badmus said that whenever anyone was waved down by the police, “try to be friendly, identify yourself and be composed.”

Read Also: Why the police are not our friends

According to her, police remain your friend; even when you have tatoos all over your body, that doesn’t make you a criminal. 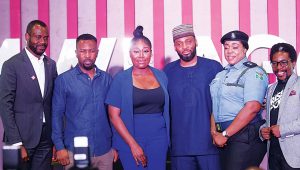 She said all one needed to do was to express and explain oneself and you would be allowed to go.

Badmus also explained that no police officer had the authority or right to search people’s mobile devices.

“Police officers are only allowed to do so when there is a reason to carry out an investigation.

“The menace of police officers stopping residents of Lagos and demanding to search their phones has become increasingly worrisome.”

According to her, the development is wrong as a phone is a private space.

Sighting herself as an example, Badmus noted that she could decide to keep vital information such as her bank account in her phone.