– The couple, Mr and Mrs Adah, received some donations from Nigerian and were able to pay their hospital bills

A couple who gave birth to a set of triplets have expressed gratitude to Nigerians who came to their rescue by paying their hospital bills.

Recall that Bioreports earlier reported that Emmanuel Adah and his wife appealed to Nigerians to help them financially after giving birth to a set of triplets in addition to their first child.

Speaking with Bioreports, Emmanuel said they have been able to pay the hospital bills through the donations from Nigerians but still need help to set up their own business.

According to the young man, he was received by a commissioner in his state but the latter was not willing to listen to his story. 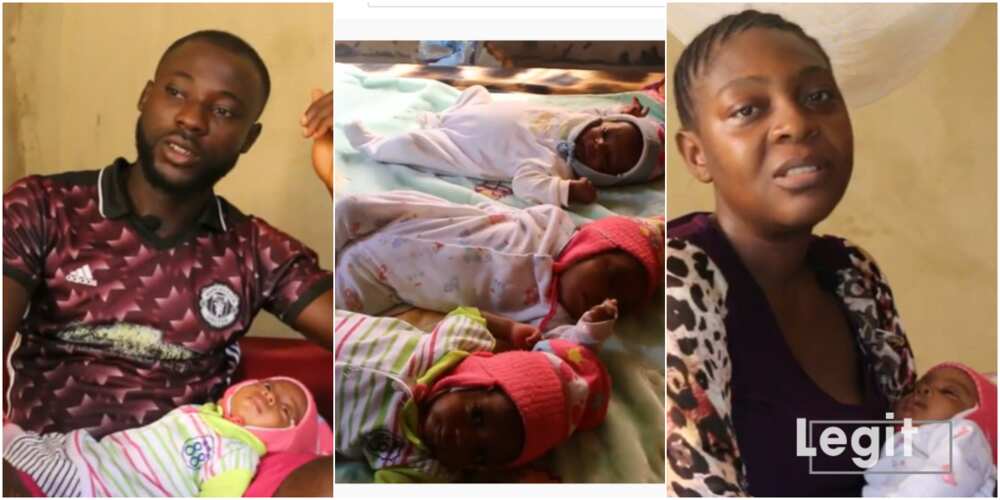 The couple expressed gratitude to Nigerians for helping them out.
Source: Original

He said the government has failed his family, adding that the only people they could turn to are Nigerians.

“The commissioner representing my state was privileged to receive me in his office. I went to his office through the help of his secretary. When I sat down, before I could even finish sharing the story with the man, he was not even willing to listen to my story.”

According to Emmanuel, the commissioner told him there was no room for employment and asked him to leave.

Mrs Adah also appealed to Nigerians to come to their rescue, saying it is not easy for the family to take care of the triplets.

In other news, a Nigerian woman who has been married for 16 years without the fruit of the womb has finally been blessed with twins.

The disclosure was made on Instagram by @ms_asoebi who shared adorable photos of the mother and her double gift.

The woman’s story is one out of many inspiring stories of couples who had tried to conceive for years and finally blessed with twins, triplets and quadruplets.

My children will never become farmers, I’m farming because there is no other means of survival – Nigerian mother reveals (photos, video)