– The queen mother of Asuboni No.3 has shed tears of joy after her town got connected to the national grid

Nana Tenewaah Safoa II, the Queen mother of Asuboni No.3, a suburb of Nkawkaw in the Kwahu West Municipal Assembly of Eastern Region has shed tears over her town’s addition to the national grid.

According to a report sighted by YEN.com.gh on Kasapafmonline, the town’s inclusion to the national grid followed the commissioning of an electrification project in the area.

The community after 500 years of its establishment has finally been added to the national grid. 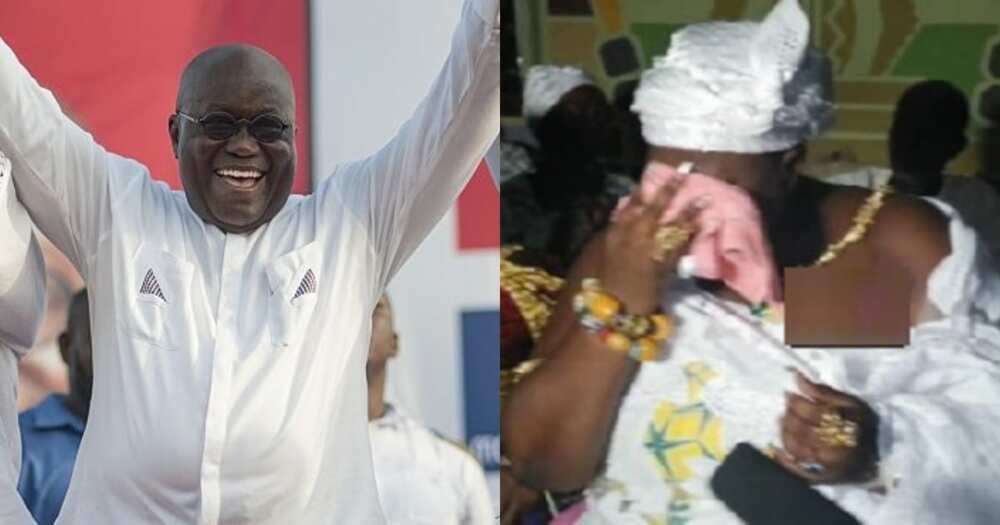 Queen mother of Asuboni No.3 breaks down in tears after her town got electricity after 500 years
.

A ceremony held on November 24, 2020, saw the entire community expressing appreciation to government for making them see electricity in the area.

While addressing the community, Nana Tenewaah Safoa II recounted the challenges of not having electricity in the area for many years.

She went on to show appreciation to the Deputy CEO for Middle Belt Development Authority Lawyer Joyce Opoku Boateng for her immense contribution towards this development.

According to the queen mother, she put the town’s major issue of not being included on the national grid to Lawyer Joyce Opoku Boateng who put in the works to ensure power reached them.

“Lawyer Joyce Opoku Boateng did not hesitate and pushed so hard to ensure she forfeit her promise and today we are experiencing this massive development.”

The queen mother also used the opportunity to appeal to the government to assist them with road networks, health centers, schools and also help develop the waterfall in the area.

Asuboni Waterfall is one of the most beautiful tourist sites in Kwahu of the Eastern Region which attracts visitors who troop to experience the unique atmosphere.

The NPP Parliamentary Candidate for Nkawkaw Constituency Joseph Frempong said he will do his best to support education in the area.

In a related development, Bioreports had reported that a Nigerian man with the Twitter name Okikiola recently proved that there are still ‘angels’ in the world who would do all to help those in dire need of assistance.

On Wednesday, September 9, the Nigerian man said he was driving by when he saw a woman under the rain shivering. He said that his first thought was that perhaps the woman is not mentally okay.