Man City boss Pep Guardiola has singled out Bukayo Saka for praise, underscoring the Arsenal youngster’s impressive performance against his side on Sunday evening, February 21, at the Emirates. 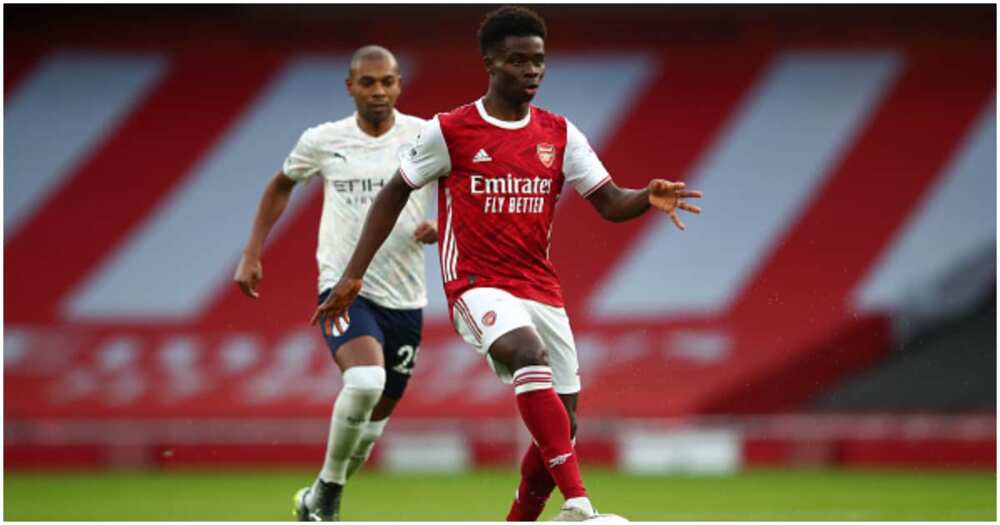 City, who are now on an 18-game unbeaten streak secured a crucial 1-0 win over the Gunners to cement their lead on top of the Premier League standings.

Raheem Sterling’s lone goal after just 90 seconds of game play proved decisive as it steered the Etihad dwellers to victory.

Despite the visitors dominating the game, they were unable to score any other goal afterwards even as the Arsenal mustered just one shot on target through the match.

Whereas City were in absolute control of the tie, Guardiola still believes Saka gave his wards a lot of problems with the ace’s threatening transitions.

The City manager further tipped his opponents for greatness in the future, noting with a few more signings for Mikel Arteta Arsenal have the capacity to challenge for titles.

“And then after the counter-attack with all the players they have behind [our] midfield players, with Martin Odegaard and especially with Saka. A real tough opponent to play.”

“They have incredible young, talented players, so I see a bright, bright future for Arsenal. And I think if they can [sign] a few players in a few positions they will make an incredible step forward.”

City’s win at the north London saw the maintain their 10-point advantage at the top over second-placed Man United who also secured a huge 3-1 win over Newcastle at Old Trafford.

United had momentarily dropped to third after Leicester stunned Aston Villa 2-1, before reclaiming the position later on Sunday night, February 21.

On the other hand, Arsenal remain rooted in the midtable at 10th with 34 points from 25 matches.

They will be looking to make amends on Sunday, February 28, when they take on high-flying Leicester at the King Power Stadium.

Meanwhile, Bioreports earlier reported that Atletico Madrid have suffered a massive injury blow ahead of their all-important Champions League round of 16 first leg against Chelsea.

Reports from Spain have it that the La Liga side are heading into the showdown with a depleted team and manager Diego Simeone has summoned four youth-teamers to complete the 21-man squad.