Resident pastor of Victory Bible Church International of Ayanfuri in the Central region, Reverend Anthony Mensah, has shared photos of how he healed a mad man.

The pastor took to his Facebook page to share photos of the mentally-deranged man who he healed and got transformed from looking dirty into a fine gentleman.

In recounting how the whole episode transpired, Rev Anthony Mensah said he was on his way to prayers when he encountered the mentally-deranged man. 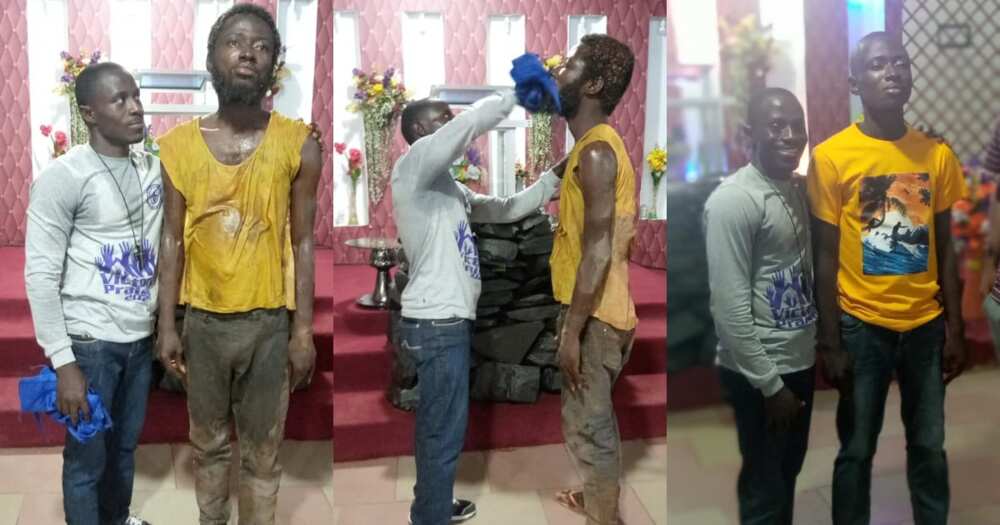 According to the preacher, God used him as a vessel to heal the ‘mad man’ who came back to normalcy instantly.

Photos seen by Bioreports on the Facebook page of the pastor showed the whole healing process as the mad man was being prayed for in what looked like a church setting.

Following the healing, the mentally-deranged man who gave his name as Frank, was taken to the barbershop to have his hair trimmed.

Frank was later brought to the church after he was all cleaned up and fellowshipped with the whole congregation.

“My name is Rev Anthony Mensah. I’m the resident pastor of Victory Bible Church Int. – Ayanfuri.I met this mad man this evening at the entrance of our church when I was going to pray. The Lord used me to heal this man from the spirit of madness. He later told me that his name is Frank and he comes from Agona Adamant. He said his father’s name is Shamo.

“God bless you for helping to save a soul.”

In the video, Bushiri calls a lady up and proceeds to ask her if she is working or a student. He then brings her to the front of the congregation.

Once there, he asks for permission to enter her house. Bushiri then proceeds to describe, in detail, what her house looks like from the outside before making his way inside.