The bald-looking Sphynx pet was said to have sneaked out of the Juventus’ forward home in Turin but after the incident, they have sent it to Spain o recover with her sister Ivana after time in intensive care.

Ronaldo’s partner Georgina Rodriguez narrated the ordeal they went through in the process, however, they are calmer now.

The 27-year-old model and influencer is believed to have flown the cat named ‘Pepe’ on her baby-daddy’s exotic private jet. 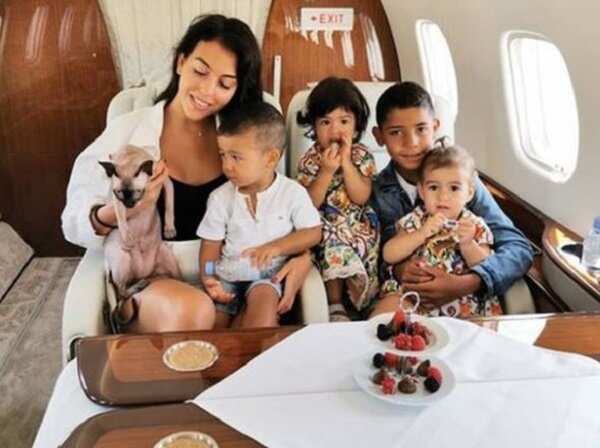 According to Daily Star, the domestic animal has become an integral part of CR7’s family having posted its pictures on Instagram.

The publication added that the couple has taken the cat with them on holidays to adorable places around the world – enjoying Ronaldo’s Gulfstream G200 long before its terrible accident.

Ronaldo had once been recorded playing with the cat while laying on the floor with Georgina massaging his calf muscles. The model said:

“Pepe has given us a terrible scare. It escaped from home and was run over.

“It was close to death and after a month and a half in intensive care at the vet’s, we’ve decided my sister Ivana should look after it. Pepe’s now in Spain recovering.”

The mother of three-year-old Alana Martina added that:

“The youngest ones didn’t understand Pepe was sick and wanted to play with him. Now he’s in the best hands.”

Rodriguez introduced the new addition to the family to her 23 million Instagram fans in November 2018 by posting a picture of it on her lap.

Bioreports earlier reported that Juventus bounced back to winning ways in the Italian League following their 3-0 triumph over Simeon Nwankwo’s Crotone on Monday, February 22.

Cristiano Ronaldo’s brace and one goal from Weston McKennie were all the Old Lady needed to clinch maximum points at the end of the meeting.