– A governorship candidate of the PDP, Eyitayo Jegede has disclosed why he is challenging Akeredolu’s victory

Eyitayo Jegede, a governorship candidate on the platform of the Peoples Democratic Party (PDP) has asked a tribunal to sack Governor Rotimi Akeredolu for not been validly nominated by the All Progressives Congress (APC).

The Tribune reported that Jegede told the Ondo state election petition tribunal on Tuesday, January 12, that the nomination of Akeredolu as the APC governorship candidate was contrary to the APC constitution and the Nigerian constitution. 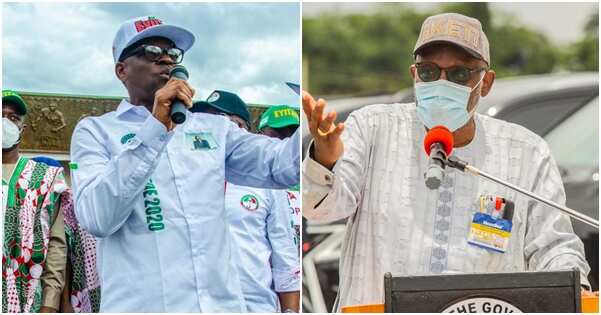 Jegede has alleged that there are irregularities in the Ondo governorship election.
Photo: @TayoJegedeSAN, @RotimiAkeredolu
Source: Twitter

However, the counsel to INEC, Charles Edonsanmiwan said Jegede is not an authorised staff of the electoral body and cannot determine if any candidate in an election has been wrongly credited with figures.

Jegede through his counsel, Onyeachi Ikpeazu asked the tribunal to invalidate the victory of Governor Akeredolu.

In another report, the governor of Ondo state, Rotimi Akeredolu, has recorded a victory in a case instituted against him over his emergence as the candidate of the APC during the governorship election in the state.

A Federal High Court in Abuja on Wednesday, December 15, dismissed the suit, saying it was statute-barred.

The plaintiff, Nathaniel Adojutelegan, who participated in the party’s primary but lost, had challenged the adoption of the indirect mode of primary for the selection of a candidate for the election.

Meanwhile, the Federal High Court in Abuja has ruled that INEC has the right to deregister the Alliance for United Nigeria (AUN) as a political party.

This was the judgment made by Justice Ahmed Mohammed, This Day reported.

According to Mohammed, INEC’s decision is in line with the provision of section 225(a) of the Nigerian Constitution.

Senate President To INEC: All votes must count | Bioreports