– This is the story of Sergeant Mary Ehiarinmwain, a Nigerian woman in the United States who has been awarded the USO’s Soldier of the Year 2020

A Nigerian woman working in the United States as a soldier, Sergeant Mary Ehiarinmwain, has been awarded the USO’s Soldier of the Year 2020.

According to Hiram Figueroa on LinkedIn, Mary was selected for the award after rescuing a soldier who was involved in an accident.

Mary did not know that the person she was rescuing was from her unit, the 523rd Engineer Support Company at Schofield Barracks, Hawaii. 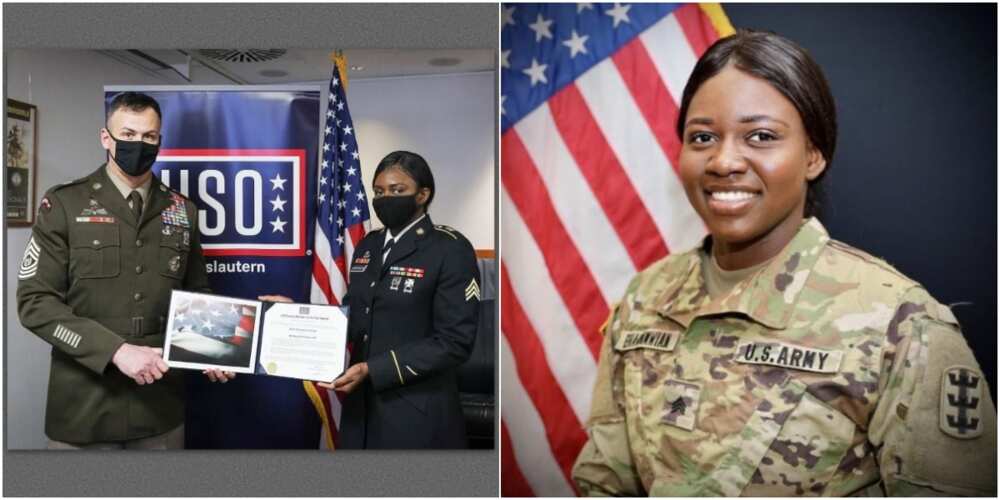 “In June 2020, Ehiarinmwian witnessed a vehicle flip over in front of her and land on its roof. Unknown to her at the time, the driver was another soldier from her unit, the 523rd Engineer Support Company at Schofield Barracks, Hawaii.

“Ehiarinmwian immediately pulled over and approached the smoking vehicle. She freed the driver and pulled him to safety, where she kept him stable until EMS arrived. The driver survived with minor injuries.

“While Ehiarinmwian viewed her actions as something that any soldier would have done, her leadership believed she deserved recognition. Several months later, Ehiarinmwian received a call from the Sergeant Major of the Army informing her she was selected as the USO’s Soldier of the Year 2020.”

Lieutenant Agunbiade was awarded the Navy and Marin Corp Development Medal for his exemplary accountability.

US crisis: President Trump blames his lawyer, Giuliani for impeachment