Nigerian man whose parents borrowed N610k to send him to US wins, becomes citizen (photos)

– A Nigerian man, Ayo Phillips, has achieved his American dream 20 years after migrating to the God’s own country

– Decades after, the man is not just a US citizen, but he has his own lovely family and a great business

A Nigerian man identified as Ayo Phillips has narrated how the sacrifice his parents made 20 years ago made him what he is today.

According to Ayo, his life has been transformed since then as he is now a co-owner of a big business in America with an opportunity to succeed beyond anybody’s imagination.

Sharing two photos of his family at the country’s immigration and citizenship centre, the man said that he got American citizenship.

See his posts below:

Many people thronged his comment section to congratulate him and wish him well in his future endeavours.

“Congratulations Ayo! My parents helped a woman from Bolivia to get her citizenship back when we were kids. It took years. I can’t imagine everything you’ve been through to get to that point. Enjoy!”

“Lovely family. Great story. Much success and many blessings.” 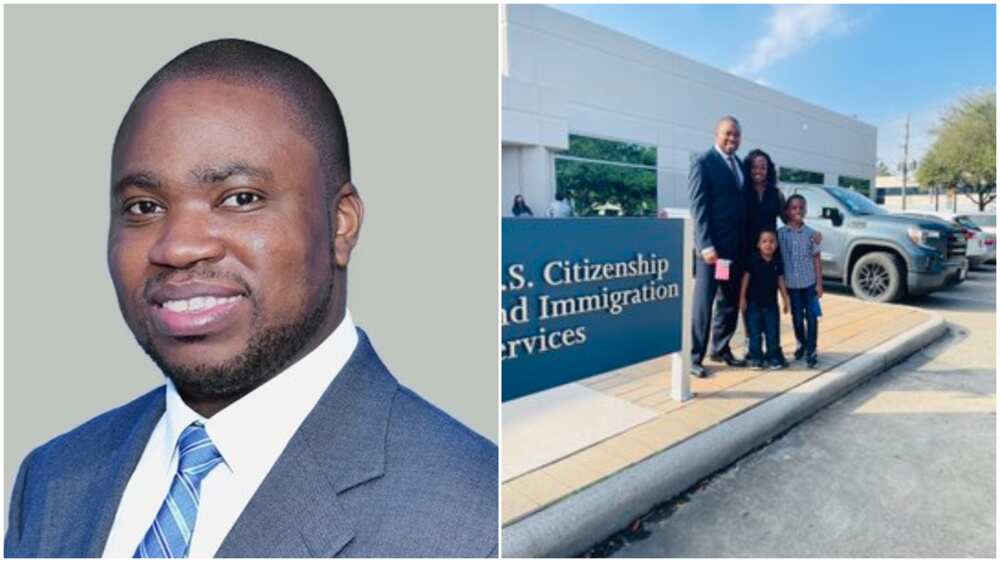 Ayo is now an American citizen and has started his own family.
Photo source: @realrookieceo
Source: Twitter

“You have worked hard for you and your family and your parents too (whose dreams you fulfilled for which they must have slogged).”

“A great example of the American dream, congratulations and best wishes on your business.”

“This is really what makes America great! Congrats Ayo. And congrats to Houston – you guys have a winner.”

Meanwhile, Bioreports earlier reported that a Nigerian man identified as Nonso and with the Twitter handle @Serioussist came online to share his family’s relocation story.

In a tweet on Wednesday, January 20, the man said he and his wife left Nigeria, a move that he called a “hard reset”, suggesting they were at their lowest low when they did.

Nonso added that they left everything behind with the determination to start a new life in Canada.

Man hilariously narrates househelp’s resignation from job: “She handed in a transfer request”

Woman who used to ignore men says she's desperate to get married, promises to pay dowry