– A Nigerian man has proposed to the love of his life, Kemi, aboard an international flight, thousands of feet above sea level

– In making the proposal, the man spoke about his girlfriend is very special to him as he told other passengers he would like to ask her a question

– Before proposing, the man walked down the aeroplane’s aisle and went on his knees whilst people clapped

Perhaps what makes love an amazing experience whenever it happens despite the fact that it seems like an everyday human thing is how different people go about it.

A Nigerian man has raised the standard for public proposals as he asked his girlfriend, Kemi, to marry him onboard an international flight.

In a clip that has gone viral online, the man said that he would like to use the opportunity to introduce his girl and ask her a very important question.

The Nigerian said he hopes Kemi is also listening to him right now. When he dropped the mic and walked down to her, people hooted as they clapped to encourage him.

Down on both knees, the lover man presented the ring to his lover. The lady who was amazed at the unfolding event accepted the proposal and they both hugged. 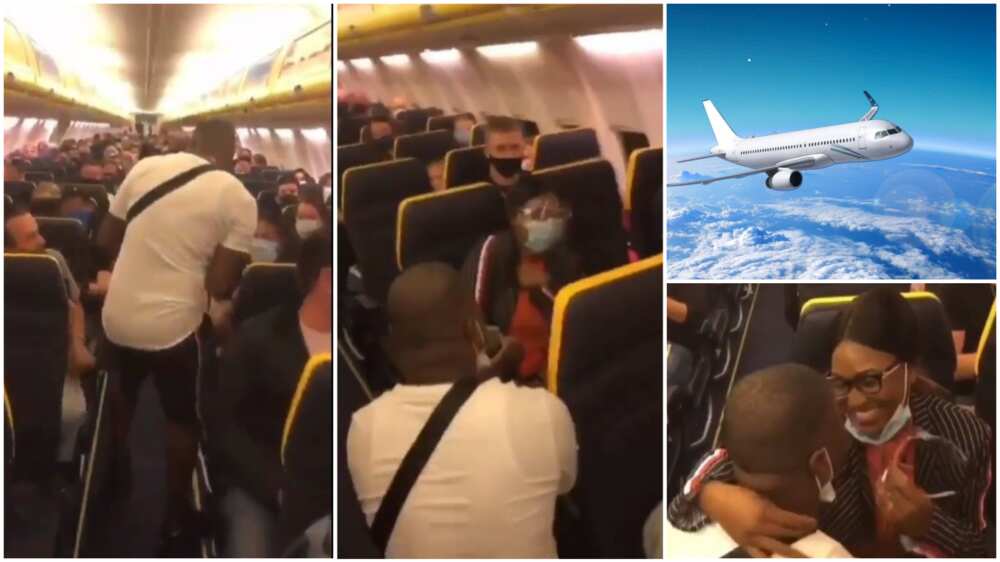 Meanwhile, Bioreports earlier reported that Olawumi Adewale and Tobi, a Nigerian couple started dating after the man wooed her in a very unconventional way through emails.

When Tobi and Olawumi first met, the former in a very stylish way asked her out through email. He titled the email “Application for the position of best Paddy”.

In the opening line of one of the emails whose screenshots have gone viral, the man said:

“I am applying to this position to be one of your Gee’s. I think we’ll get along really well as friends.”

Further in the email, he highlighted the reasons/qualities that made him better for the application. One of them was that he is a person who is open-minded and quite spontaneous.