A Nigerian man, Tunde Onakoya, has received much praise on social media after he shared a video of him teaching a kid, Sunday, chess in the Yoruba language.

In a Twitter post on Friday, February 19, the man wrote a detailed thread about how he met the kid in a slum during a downpour.

He said that despite the rain, the boy kept picking scraps into his sac. Tunde was later able to get the boy some food and take him to a health centre for treatments.

The Good Samaritan said that after that encounter, he could not get the boy out of his mind as he just recently relocated to Ikorodu because of a chess programme he was running. 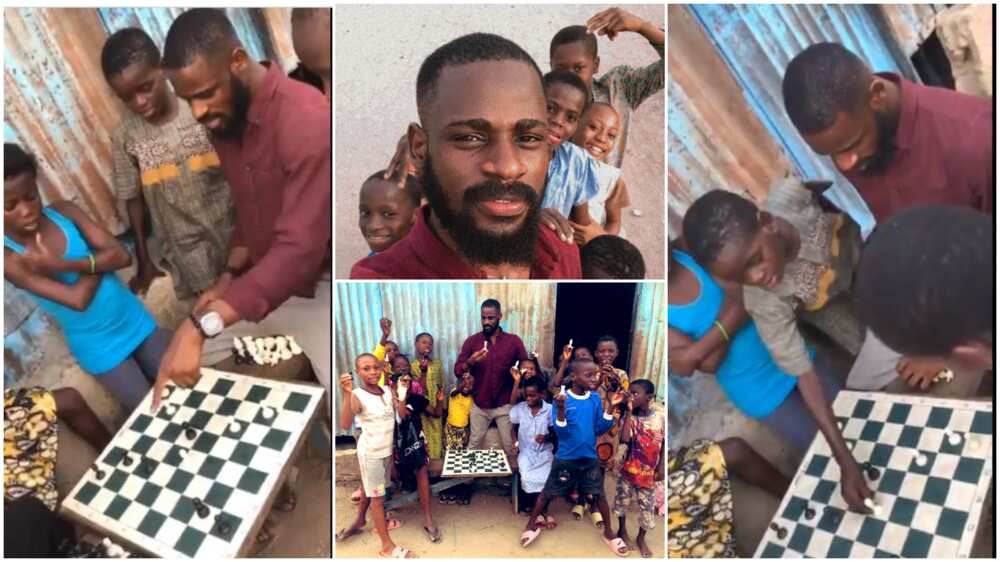 Many people prayed for the Nigerian man for his kindness.
Photo source: @Tunde_OD
Source: Twitter

To get help for him, he called for public help and people donated. After the crowdfunding, he was able to get the boy some clothes and later realize that his family lived in a worse situation.

Getting to talking to his father, he got to know that the mother died and the family have been subsisting.

Several days after the man’s help, he visited Sunday, taught him how to play chess as he prepared him and his sister for school after they got a scholarship.

As at the time of writing this report, the video has been watch over 150,000 times with thousands of reactions.

Below are some of them:

“I couldn’t stop the tears from rolling down my cheeks. May God reward you abundantly for this.”

“Guy, I don’t know you, but lemme tell you this m, the long hand of the Lord will surely locate you. He alone understands your inner cries and he will not forsake you… Bless you.”

“Thank God for people like you in this country God bless you abundantly and fulfill all your heart desires you and to everyone that contributed to helping out.”

Meanwhile, Bioreports earlier reported that Nigerians rose up for the cause of Ashamu Lekan whose video went viral days ago after he was filmed repairing a tricycle.

In the said clip, the boy who turned mechanic and dropped out of school said if he had a helper, he would like to continue his education.

Days after, a good Samaritan with the Twitter handle @AnatuGreen coordinated donations from willing Nigerians so the young kid can live his dream.