– Sharing photos of a plate of rice, water, and soft drinks, she tagged it “how it started, how it ended”

– While some people believed that the cans are empty in both photos, others were simply wowed by her act

A Nigerian lady with the Twitter handle @dinma_x has done it again, and this time around, she devoured a full plate of rice and combined the meal with two canned Malta Guinness.

This would not be the time the lady would be sharing photos of her feasting. In fact, for weeks now, she has kept at it, drawing massive reactions from Nigerians.

@dinma_x first came to the limelight with her food photos when she shared how she levelled a mountain of cooked beans.

Days after, she ate big cucumbers with packs of groundnuts. As if that was not enough, the same lady ate full plates of abacha with four fresh apples

In her latest tweet on Monday, February 22, posed in her signature hairstyle and spectacle, she showed how she again achieved another foodie feat.

As at the time of writing this report, her tweet has over 14,000 likes with 3,000 retweets. Below are some of the reactions:

“In the first picture, you forgot to close the cans openings well.”

“You are a maestro!” 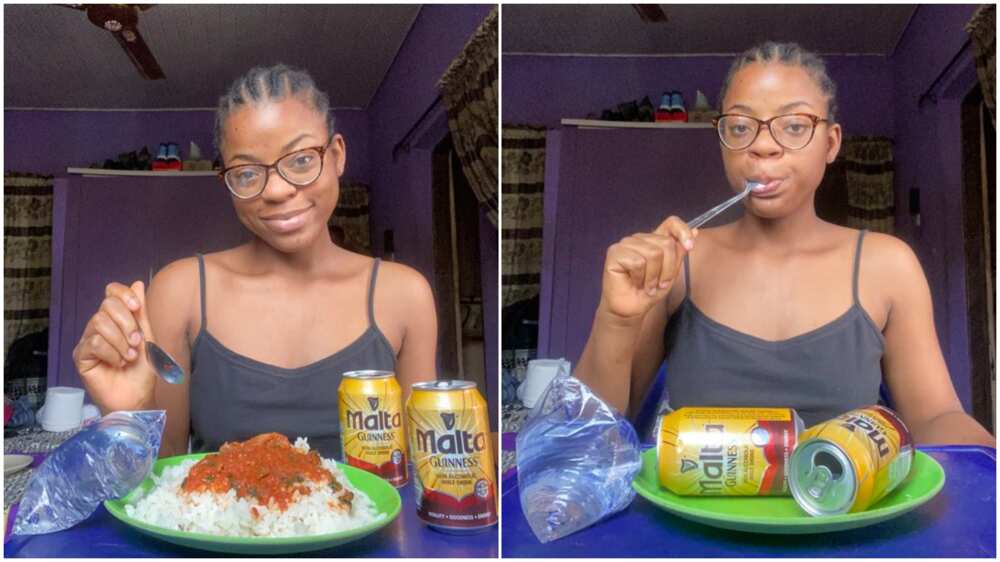 Some tweeps wondered how she was able to eat it all with ease.
Photo source: @dinma_x
Source: Twitter

“U a certified foodie, dayuumm.”

“The food isn’t much, my own issue is how she finished two malts?”

“The Malt in the first picture is an empty can. I zoomed it and it’s opened already. So eat you rice and pure water in peace and stop fooling yourself.”

Meanwhile, Bioreports earlier reported that a Nigerian man identified as Olusegun on Twitter shared a very ‘horrible’ dating experience he had while his monthly salary was still N20,000.

Olusegun said after that day, he knew right there that the lady was not the woman he would spend the rest of his life with.