– Kaozar, who spoke with Bioreports, said he learnt how to carve on fruits when he was financially down

– According to him, fruits will soon replace cakes at weddings because it’s not everyone that likes eating sugar

A Nigerian artist identified as Edu Oludamilare Kaozar has shared how he started his craft of carving on fruits.

Speaking with Bioreports, Kaozar said fruits will soon replace cakes at weddings because it is not everyone that likes eating sugar.

The young man could be seen in a video carving on watermelons so effortlessly. He said fruits can be used in every event.

According to Kaozar who learnt how to carve when he was financially down, he finds fulfilment in what he does because he gets paid and also enjoys himself at events where his service is needed. 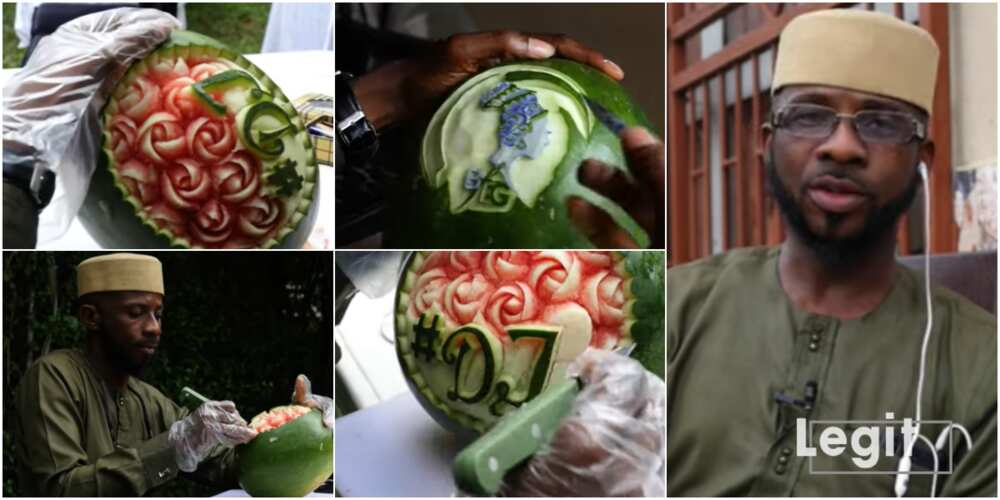 Edu Oladamilare Kaozar learnt how to carve on fruits when he was financially down.
Source: Original

He said he had always wanted to be an architect because he is good in mathematics and is artistically-inclined.

According to him, fruit carving is not yet lucrative but it will take over weddings and other events in years to come.

In other news, a young Nigerian man identified as Otti Emmanuel Ifeanyi has shown that the country is home to a lot of creative minds who keep creating masterpieces.

Ifeanyi creates artworks with leaves and fabric waste and these masterpieces are a reflection of the beauty that can be found in Nigeria in particular and the African continent in general.

In one of the artworks, Ifeanyi tells the story of an African woman whose love for her child is unwavering.

The masterpiece shows the woman tending to her child and her demeanour suggests that there is a strong bond between her and the child.

Why I left PDP, by Umahi

Why I left PDP, by Umahi