There seems to be a fresh crisis in the Kwara state All Progressives Congress (APC) over the control of the party’s structure and registration and revalidation exercise.

This is as Lai Mohammed, minister of information and culture, blasted the APC deputy national publicity secretary, Nabena Yekini, after the party’s chieftain urged him (Lai) to submit to Governor AbdulRahman AbdulRazaq of Kwara.

It would be recalled that in a statement on Monday, February 15, the information minister had called for the cancellation of the registration and revalidation exercise in Kwara, alleging lack of credibility in the process. 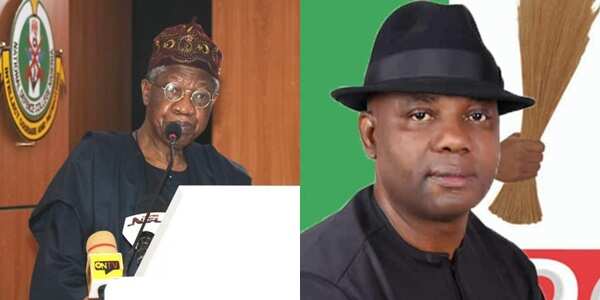 The minister had also alleged that there was no proper provision for the exercise, adding that many stakeholders of the party in Kwara may be denied registration.

But in a swift reaction, Yekini urged the minister to bury his ego and submit to the control of the Kwara state governor, saying he (AbdulRazaq) is the recognised leader of the party in Kwara.

As fight with Makinde worsens, Fayose speaks on joining APC, reveals how he worked for Fayemi’s election

However, in a statement on Tuesday, February 16 obtained by Bioreports, Mohammed said “Nabena must have been speaking for himself.”

According to him, the APC as a party “has no position like that of Deputy National Publicity Secretary” since the dissolution of the party’s national working committee in December 2020.

Mohammed slammed Yekini as a “pretender and impostor.”

“As things stand, therefore, anyone claiming to be the Deputy National Publicity Secretary of the APC is an impostor, hence I will not dignify such a pretender with a response.”

Meanwhile, Chief Bisi Akande, former Osun state governor, has faulted the creation of the caretaker committee for the ruling party.

Akande, who spoke on Wednesday, February 3, at the APC (2021) membership registration and revalidation exercise in Ila Orangun, said the creation of the caretaker committee is an abnormality.

He further stressed that if not controlled or expeditiously managed, the caretaker committee may end up becoming a disgrace.