Home hearsay Mum devises a means to make dead mum attend his graduation ceremony; here’s what he did that got social media talking (photo)
hearsay

Mum devises a means to make dead mum attend his graduation ceremony; here’s what he did that got social media talking (photo)

A young man with the Twitter handle @witterfitness recently graduated from school and would have loved his mother to be present but the latter is no more.

@witterfitness decided to bring his mother’s portrait along with him to have the feeling that she was with her on his special day.

According to the young man, he engaged in menial jobs at the age of 13 to help his mum who was visually-impaired and battling with illness until she breathed her last. 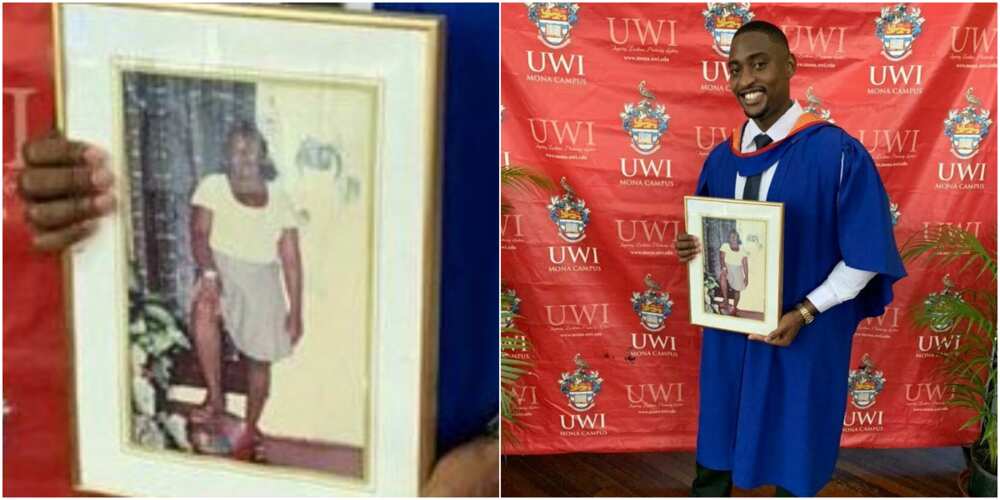 The young man would have loved his mum to be at his graduation ceremony but she is no more.
Photo credit: @witterfitness
Source: Twitter

“I decided to take my mother’s picture with me on a special day like this. R.I.P. mommy. From selling bag juice, guinep, ice in linstead market and working at an wholesale at age 13 helping my visually impaired mother that was also battling with illness until she passed away.”

Tweep with the handle @DripDry6 wrote:

“I am exceptionally proud of you. Congratulations on your success story.”

“Congratulations son and condolences on the passing of your mom. Wishing you a ton of success as you move onwards into the new phase of your life.”

“This is so inspiring… Amidst the odds, you persevered. Congrats. May her soul rest in peace and may your endeavors be prosperous.”

In other news, a Nigerian lady, Elizabeth Ogwo, has overcome all odds to achieve her life’s dream.

In a LinkedIn post, she said it took her 10 solid years before she was called to the Nigerian bar as a lawyer. She also had to study at three different universities.

The policemen were right there! Young man painfully recounts how he was robbed, beaten and officers watched