A woman identified on Twitter as @missjellinsky has taken to the social media platform to share the bizarre thing her sister found in the basement of a new house she moved into.

@missjellinsky got social media users talking after sharing a picture of a building basement that has the head of a doll stuck in the wall.

She captioned the picture:

“My sister moved into a new house and found this in the wall of her basement.”

Social media users took to the comment section of the post to share their thoughts as some advised that the occupant of the apartment should move out as soon as possible. 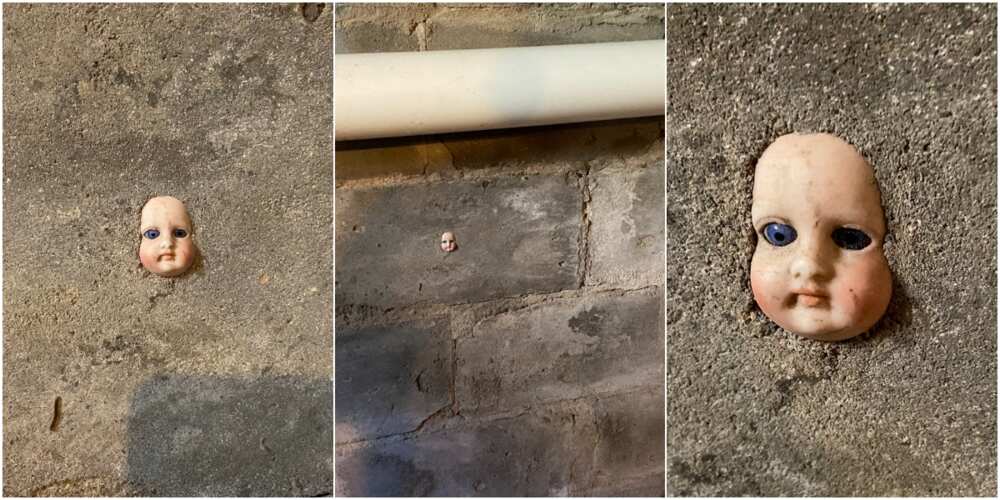 A woman moved into her new apartment and found the head of a doll stuck in her basement wall.
Photo credit: @missjellinsky
Source: Twitter

Tweep with the handle @ASingleBlackFe2 wrote:

“It ain’t her house no more, Move. Why didn’t she check the basement before?!”

“Only if blood starts coming out of the faucet. Then you know it’s time to leave.”

“Those are cellar babies. In the late 60s/early 70s it was a trend in both NYC and California to embed doll parts in the walls of your house, including basements. Sometimes items were hidden inside of these as well, including newspaper clippings and (rarely) cash. Take a look.”

Below are other comments:

In other news, celebrating wins will always bring smiles to faces. Especially when the achievement comes from hard work. @Samke_nkwanyan did just that as she shared an image of the house she worked hard to build.

She took a loan of R5,000 (N124,975.00), which she paid back from August to now. Even with her savings, loan, and salary, she still struggled. @Samke_nkwanyan said she asked for help from family and friends who did all they could to assist.