In the face a biting economic crisis and hardship within communities which is made worse by the impact of the global Covid-19 pandemic, Super Eagles winger, Moses Daddy Simon escaped the busy world of football to help relief the burden on many families.

The 25-year-old recently drilled boreholes for IDP centres in Kaduna and the people of Obagaji Agatu community in Agatu Local Government Area of Benue State. His father hails from Obagaji Agatu but the Nantes winger was raised in Kaduna State.

Moses has been unfortunate in representing Nigeria at major competitions; one gloomy memory in the minds of his supporters is his omission from the 23-man squad to the 2018 FIFA World Cup in Russia due to injury.

Like a lot of young Nigerian men, Moses has had his struggles with life and having football as a career came with sacrifice, doggedness, belief and a five hours conversation which eventually paved the way.

In an exclusive conversation with MORAKINYO ABODUNRIN and CHIJIOKE EZEALI, the fleet-footed winger spoke candidly about his humble beginning and why he’s unfazed despite being a ‘star boy.’

My love for Charity

I developed my love for charity through my dad because he does that religiously. Sometimes he gives out of the little he has. He buys N200 biscuits and share for kids around, including his children. Although, he earns very little yet makes sure he gives to people. Sometimes, he stays hungry for people to eat; my siblings too do the same.

I don’t post my charity works on social media because I’m doing it for God and not for anything. So, I don’t give because of who you are. I give because of God. I only tell them to pray for me and don’t tell anyone else because I have my own problem too. So, this is how I help with the little I can because the little you help go a long way for people.

How I decided on the boreholes 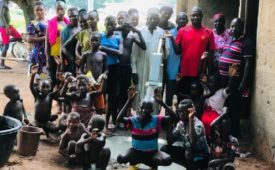 Growing up from barracks to the ghetto

I attended a government school and came out with a good grade in primary school. My dad was so excited that he asked me where I wanted to continue my secondary school. I was playing football in secret and when the opportunity came to pick a school – I chose a private school and my dad immediately approved. He never knew I chose Best way academy Hayin-Banky Kaduna North, because they play football. He took me there and registered me.

The school always play football every Thursday and when it was time for inter-house sport. I helped my class beat JSS 2, JSS 3 and everyone said this guy is good. In my JSS 2, I was made the assistant captain of the school team but it was hard for me because I can only play in the school and not outside as my dad must not find out. Interestingly, my Dad doesn’t know most of this story (…he burst into laughter while robbing his head with his left hand). 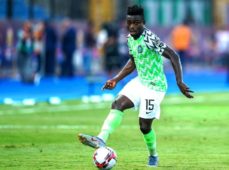 How my dad found out I play football

The school’s game master, Adekey David told me to join an academy and I asked if he wants my dad to kill me? He said the school close by 2pm and school lesson starts by 2.15 pm. He informed me that there’s an academy close to the school that trains from 2pm and all I need to do is join them after school hours and after that, go home.

So, from school I go to play football and go home but I always hide my football in one cemetery in a bushy area then go home and the next day I would go back to the cemetery and take my boot and go to school.

On a certain day I was training and there was heavy rain. I got very wet in my uniform and books. I thought of what to tell my dad but luckily my dad wasn’t at home. I just show my mom the books and told her I needed new books, she said I should tell my dad when he returns. So, I did and he said no problem and he gave me money for new set of books.

As times past, I noticed my dad was suspecting my activities. And there was pressure from the academy coach Gabriel Obaji, where I trained to come every day as he insists that I’m a very good player. Saturday and Sundays they play different games but I don’t show up because I was still scared of my dad finding out I play football.

He promised to go talk to my dad. He had the confidence because his dad was also is a military personnel. He had a conversation with my dad for five hours before he agreed to allow me play with the academy. But my dad had him promise that nothing will happen to me.

I played every day they have games. My dad came to watch me one day and was impressed. Since then he allowed me to play and that was how I got the freedom to play.

My journey from academy football into the national team

From the academy I went to Jos to join Golden Soccer Academy and that’s the academy Ahmed Musa came from. Although, I stayed there for just two weeks and that was where I was invited to the U-20 team under John Obuh but I didn’t play any games throughout the tournament. It’s the coach decision and I can’t blame anybody but then I was young and don’t have experience.

As a Christian I believe every disappointment is a blessing. I believe God prevented me from something. I may go to the World Cup and play but get injured and end my career there. But the 2013 World Cup actually disappointed me a lot because I suffered with the team when it was time to eat from what I laboured for – I got injured but with the help of my family and my wife I just had to be strong.

Actually, my best position is left wing but as a good player you can’t decide for the coach. He may choose to play you somewhere else because of his formation and you must respect that decision. At Levante, I play as Right Wing Back (RWB) and in Gent as Left Wing Back (LWB) where I learnt a lot – later I was switched to a striker and played there against Wolfsburg in the UEFA Champions League.

When I moved to Nantes, the coach saw me and said, I’ve to play left wing. He later changed and played me as a striker and sometimes he put me as a second striker because he decides if I’ll fit his pattern and how the team is going to play.

I’m not targeting any caps record for the national team because football is something you can’t predict but you want to play as long as you can. The decision is always from the coach over who plays and my own job is to focus on my game.

Daddy is my name. My dad actually gave me the name DaddyNem and the meaning is ‘My Daddy’ and people remove the ‘Nem’ and call me Daddy.

It’s just hard work and prayer that’s all because I believe hard work pays off. I wasn’t surprised because with I did in the club with the help of other players I believe I would be the best.

There is no pressure this season for me. It’s just to work hard and do my job, focus and be prayerful too. I just want to be better than last season.

My wife is everything

She is everything to me, because we know each other a lot and she’s my best friend. We love each other and don’t hide things from each other and we understand ourselves. With the help of God and prayers our bond will be stronger.

Actually I’m aware of the Tottenham Hotspur interest. It was not a rumour but it’s not something I need to speak about. I will just leave everything in God’s hand. I would love to play in the premier league someday by God’s grace but I just have to keep praying and working hard.

Adapting to different cultures in Europe

It’s my job. So, anywhere I find myself I just have to adapt quickly. Also with the help of my teammates I get to settle quickly. Any club, I go I’m lucky to find one or two people that would understand English and that helps me settle because language is one of the barrier that could bring setback.

You can see where I am now my bed… (he laughs excitedly). I always stay indoors or sometime I play FIFA, play with my kids or take my dog for a walk. Here, I have one dog but in Nigeria I have eight dogs. I actually grow up with dogs – at times I can’t sleep without dog.