Monkey steals phone inside man’s apartment, takes selfies and video with it after trying to eat device

– The phone, which belongs to a 20-year-old Malaysian man, was later found and in it were the monkey’s selfies and video

– The monkey stole the phone on Saturday, September 12, and it was found the following day after the animal realised that it was not useful

A Malaysian man identified as Zackrydz Rodzi has found monkey selfies and video on his phone after it was stolen by a monkey.

The 20-year-old man told BBC that he realised his smartphone was gone when he woke up at around 11am on Saturday morning, September 12.

The video shows a monkey trying to eat the phone. The phone was later discovered on some leaves beneath a palm tree in a jungle when Rodzi called it and heard it ring. 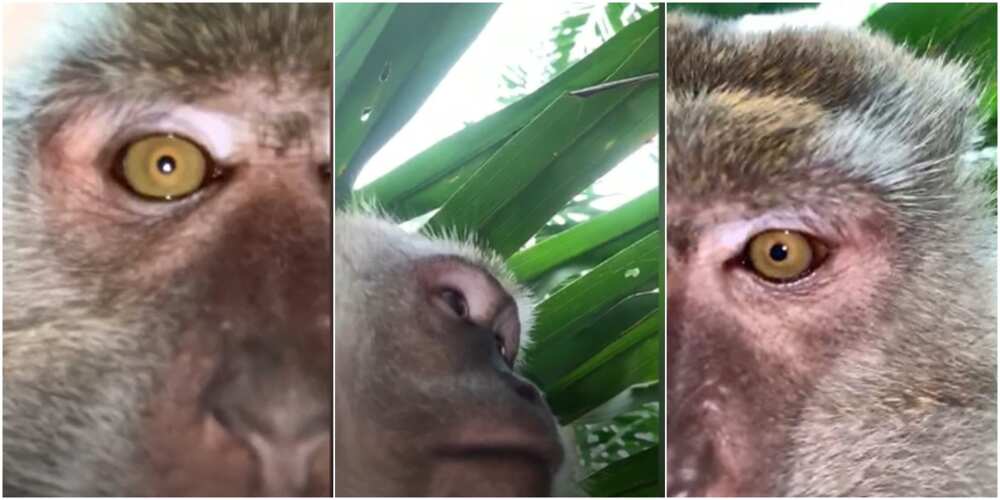 The monkey left his pictures and video on the stolen phone. Photo credit: Zackrydz Rodzi
.

The young man said there was no sign of robbery and suspected that the monkey may have entered the house through his brother’s open bedroom window.

He said: “There was no sign of robbery. The only thing on my mind was is it some kind of sorcery.”

On calling his phone again he heard ringing from the jungle a few steps beyond the back garden, he said, then discovered the muddied phone on some leaves beneath a palm tree.

In other news, a year after losing her first-born baby, a nine-year-old gorilla identified as Kala is bonding with her new baby almost a month after giving birth again.

Kala, who is one of the seven western lowland gorillas in Bristol Zoo, gave birth to her new baby on August 19.

Bioreports notes that a zoo photographer captured the beautiful bond between the mother and her baby when the latter was less than two weeks old.

Nigerian man rescues, shelters snakes and other wild animals for a living| Bioreports

By Tunji Adegboyega Governor Nasir el-Rufai of Kaduna State is going to be in the news once again for some...