– Joseph Korley Tetteh, currently the CEO of Seek Ye Bikes was unable to further his education when he finished junior secondary school but he is now a self-taught creator

– He has developed wooden bicycles and cars that are ideal for tourist sites, music videos and more

A talented young man in Ghana named Joseph Korley Tetteh could not further his education after junior high school but has come up with some groundbreaking inventions.

In an interview conducted with Joseph by SV TV Africa, it came out that he has successfully created bicycles and paddle cars out of wood.

According to Joseph, his dream is to become one of the major manufacturers of bicycles in Ghana and to establish a market that would supply the wooden cars to tourist sites around the country and world. 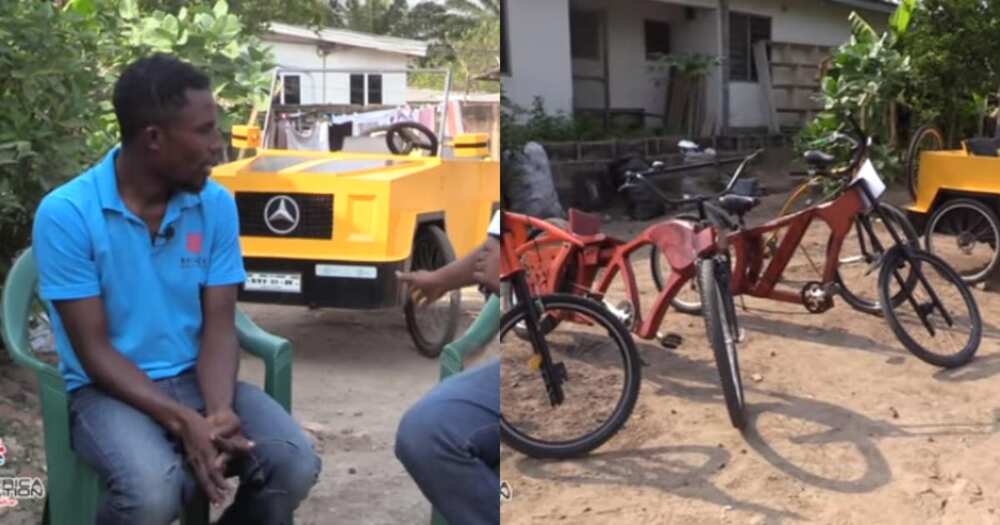 Describing how it all started, the self-taught inventor mentioned that he made his first wooden bicycle far back in 2007 but abandoned the project due to a lack of financial support.

He went back to being a draftsman creating building plans, which had been his means of livelihood since he could not further his education.

Currently, Joseph Korley Tetteh, the CEO of Seek Ye Bikes is literally begging for financial support to be able to do mass production of his inventions and expand the market.

Meanwhile, Bioreports had earlier reported how young boy built a motorbike, single-seater aircraft, a two-seater sea boat and some remote-controlled cars before his 18th birthday.

Born to the family of Rechiel in Umuebo Umuezeala Owerri of Ehime Mbano LGA in Imo state, the 6th child of a family of 10 explored his creative abilities and talents at the age of 7.

And at the turn of 16, he had built an RC scale aeroplane that flies which he called “Donko King”.

I didn’t love my husband, I married him to punish my ex-boyfriend for cheating – Woman reveals