Meet Nigerian doctor Onyeama who is leading this big COVID-19 vaccine research in US, here’s his life story

– Before his professional success abroad, he graduated from the University of Calabar with his first medical degree

Another Nigerian, Onyema Ogbuagu, has made the country really proud as he was part of the doctors that are involved in the breakthrough Pfizer COVID-19 vaccine.

BBC reports that Onyeama said that the efficacy of the drug is as real as it was announced. It should be noted that when administered, the result is 94% effective among adults that are 65 years old.

Below are therefore five interesting things to know about the medical official.

Onyeama is the son of the former vice-chancellor of Abia State University. His mother is a professor of sociology. Not only does he have a twin but unlike him, his brother is an engineer.

2. His first degree in Nigeria

The much-celebrated Nigerian medical official studied medicine at the University of Calabar in Cross River state and graduated in 2003.

He did his residency at Mount Sinai School of Medicine and in 2012 had his certification from Internal Medicine. 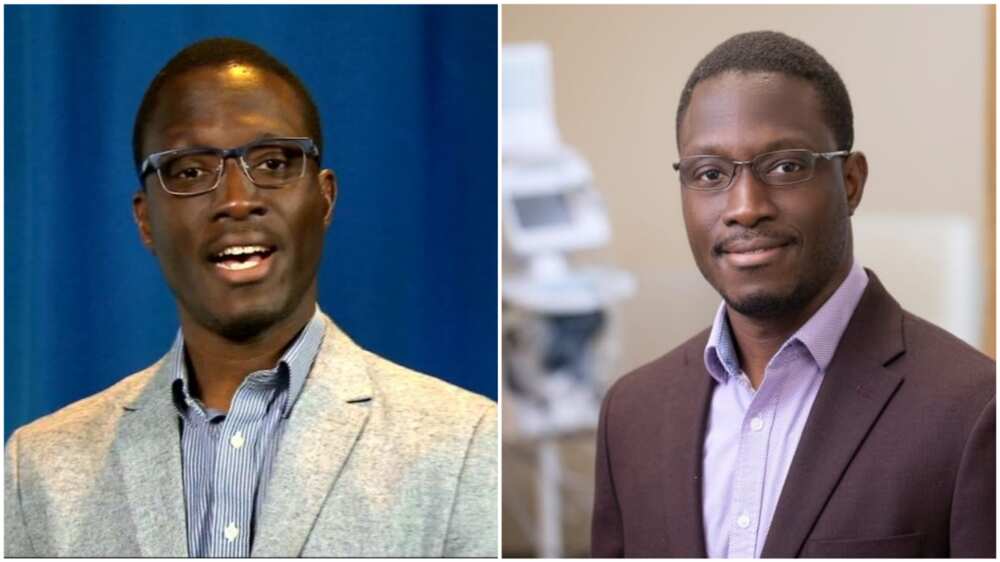 Nigerian Onyema has made great inputs in the field of medicine.
Photos sources: BBC, Arise TV
.

In 2015, the Nigerian became a fellow of the American College of Physicians. Two years after, he was nominated for the Charles W Bohmfalk Award in Clinical Science at Yale University School of Medicine.

According to TheCable, Ogbuagu was awarded the Gerald H Friedland award for outstanding international research in 2019.

He is the present Yale head investigator for diverse clinical trials for COVID-19 including Remdesivir that was earlier approved.

Others are leronlimab and remdesivir and tocilizumab combination therapy including the Pfizer/BioNTech Vaccine trial.

5. How long has he been with Yale?

According to his short profile on the school’s site, he has been the director of the Yale AIDS Program HIV clinical programme and an investigator of other clinical trials for five years now.

Meanwhile, Bioreports earlier reported that a coronavirus vaccine being developed in the UK to fight against COVID-19 proved to be effective.

It was gathered that the Oxford University and AstraZeneca announced their vaccine can prevent 70.4% of people from getting coronavirus.

According to the data released by the company, the coronavirus vaccine is 90% effective if a lower dose is used. Also, there are early indications it might also help stop the spread of the deadly virus.

Our coming to Canada will now be easy – Nigerians react as lady graduates, starts her journey as Canadian immigration consultant

Our coming to Canada will now be easy - Nigerians react as lady graduates, starts her journey as Canadian immigration consultant