Massive reactions as man says best way to eat fufu and egusi is with spoon, his video goes viral

– In the clip, he said using cutlery for the meal will keep oil stains from the hands while eating

An unnamed young man has trended online after advising people in a short video on how best to eat their fufu and egusi soup.

The clip which was shared by KraksTV on their Instagram page showed the man carefully scooping the meal and mixing it with egusi before he swallowed it.

The man while talking to his audience said eating fufu with spoons is the African way. He said eating in that manner will keep stains away from one’s hand. 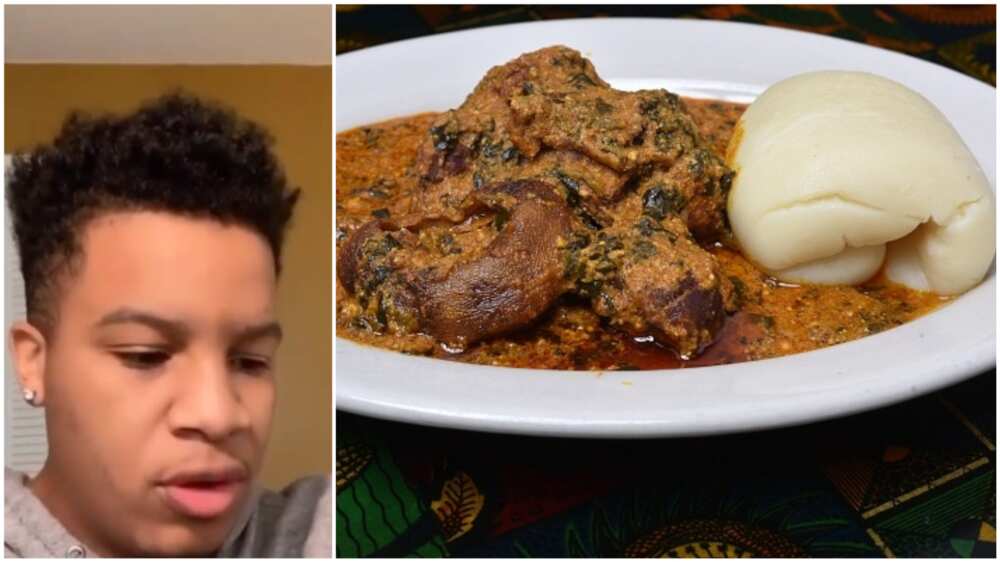 His clip has been watched thousands of times as many reacted massively, saying that everything is wrong with what he said.

Below are some of the hundreds of comments the video got from Nigerians:

“Chai we have lost this one.”

“Chaiii na wetin too much nepa dey cause.”

“First of all, it is called swallow for a reason ..u dnt get the real taste when u use spoon.”

“Koshi danu… Stay there and be using a spoon. Let me keep on using my hand jor.”

“This one doesn’t know hands is part of the ingredients.”

Meanwhile, Bioreports earlier reported that a Nigerian man with the Twitter handle @OsitaAmakeze on Wednesday, December 2, showcased the monstrous yam that was harvested in Agulu, Anambra state.

He said that the type of yam is what they call “ofu ji a na-eme offload”. The yam has received some interesting interactions on Twitter.

It should be noted that his latest tweet was a follow-up on the one he made in 2019. Last year, he wrote about how his friend’s yam weighed 153.10 and was the heaviest in his community.

Why we started our food and drink festival – GT Bank | Bioreports