A Nigerian lady with the handle @OlisaOsega has stirred conversations online after she advised men to only stick to rings they can afford when they want to propose to their women.

She said worrying over the inability to buy an ‘expensive’ one should not be an issue as the same ring could be replaced by a better one when money comes. 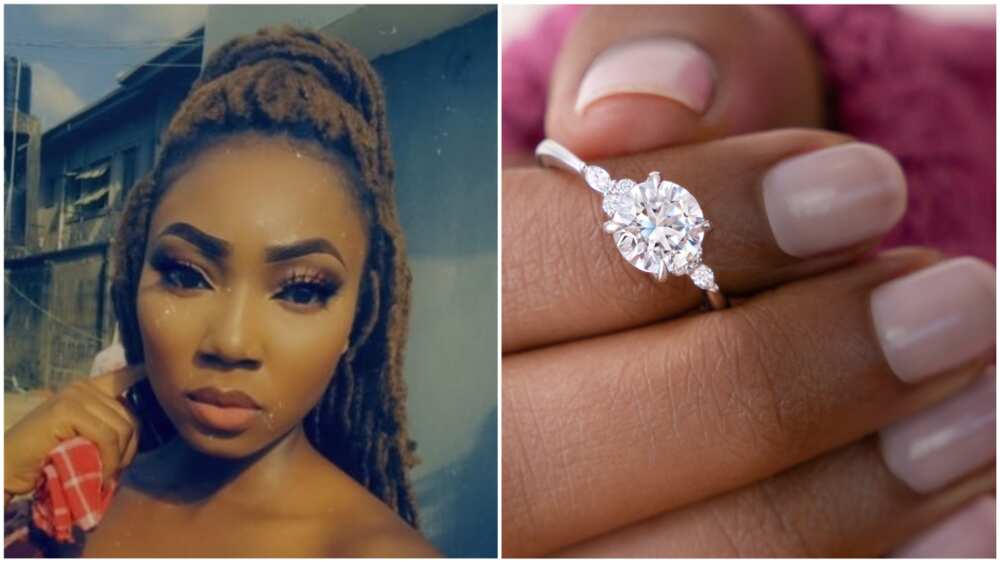 Many under the lady’s tweet debate the significance of an expensive engagement ring before marriage. @OlisaOsega, Brilliant Earth
Source: Twitter

@OlisaOsega said their ladies should not have any problem with the arrangement. Many in her comment section are wondering why an engagement ring should be a cause for worry in the first place.

Below are some of the reactions the post got:

“Even wedding ring. I purchased what we used according to affordability (in 2011), changed it after a yr. Then discovered the first was even better than the second. Can’t say “shame” made me look for money to get the 3rd, PMB’s dollar just started shooting up & affected the price.”

“Ladies advising themselves in Buhari regime after double recession in 5years… I’m loving this.”

“Change keh.. she can wear it till you guys get married. Engagement ring isn’t to be worn for a long time.”

“Wahala for who dey wait for man to kneel down propose with ring. Ogbeni go nd collect list jor.”

Meanwhile, Bioreports earlier reported that a Nigerian man raised the standard for public proposals as he asked his girlfriend, Kemi, to marry him onboard an international flight.

In a clip that has gone viral online, the man said that he would like to use the opportunity to introduce his girl and ask her a very important question.