Some people work hard to achieve their dreams. One of those people is Solly Thomas Ngobeni. His story was shared on Varsity World’s Facebook page.

According to the post, Ngobeni graduated with his law degree at the University of South Africa (UNISA).

Ngobeni said it took him eight years to realise his dreams. From 2006, Ngobeni worked as a delivery man in Pretoria for R300 a week. However, he wanted to do more with his life and decided to go back to school to obtain his matric certificate.

He then worked as a gardener in 2008 and used the money to pay for university.

“Today by God’s grace, I am giving myself a birthday present. A birthday present which took me almost eight years to master and perfect. It was back in 2006, on this very same day 18 of august when I got a job to work as a delivery guy around Pretoria CBD earning R300 per week, I delivered furniture in people’s homes and I got inspired by the things I saw and the interaction I had.

“That prompted me to go back and register for a matric certificate in 2007 and the only school that was in a position to accommodate me was ABET in Soshanguve because I had since left school in my standard 6 due to challenges I faced, for 10 years I was at home chasing shadows, and I worked hard to pass with an exemption that year, seeing my name written in a newspaper for the class of 2007 was a feeling that I can never try to explain. When they say, ‘It runs in the family,’ you tell them, ‘This is where it runs out.’

“I then got a job to work as a gardener in 2008 and later on another better job and the requirement of it was a matric certificate. I then took my pay and went to UNISA. Today on the 18th of august, I’m a proud holder of a National Diploma in Law and LLB degree.” 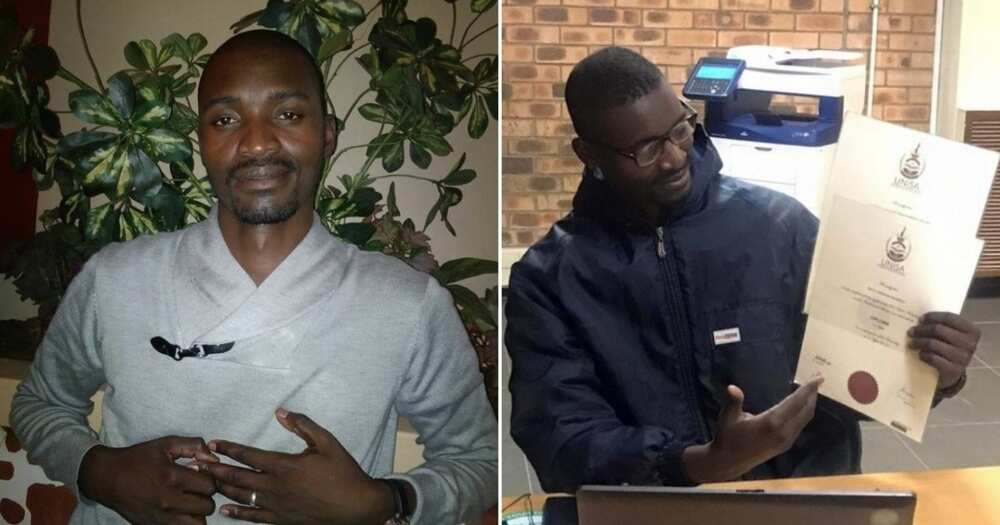 The post inspired South Africans and they applauded Ngobeni on his academic success.

“Congratulations! You are a huge inspiration to us all and you have done yourself very, very proud.”

“Congratulations Mlambya, so proud of you my brother. Perseverance , hard work and persistence really pays. Halaalaa.”

“Congratulations brother you’re such an inspiration to all of us there’s no such thing as giving up..we just need to dust ourselves and keep going forward.”

“You sir, are an inspiration! Congratulations on all your achievements!”

In other news, a Nigerian lady has taken to social media to celebrate her win after graduating as one of the top 10 best graduating students in corporate law out of over 1,700 students.

The young lady with the Twitter handle @_omobanjo, who is part of those that were recently called to bar, took to the microblogging site to share the good news.

How I attracted investment to fight insecurity, crime in Nasarawa – Sule