– According to the man identified as Prophet Mufasa, he stated that his woman must have to fear him to some extent

– Explaining further, he stated that she needs to know that her life may come to an end if she wrongs him

When it comes to dating, people tend to have their preferences. For a Twitter user, however, his partner must fear him.

Identified on the app as Prophet Mufasa, he stated that he can never date a woman who doesn’t fear him. Mufasa added that she needs to understand that her life may end if she ever wrongs him. “I can’t date a woman who doesn’t fear me to an extent, she needs to know her life will come to an end if she wrongs me.”

See how some social media users reacted to the rather strange post:

_thatdarkskinnedgirrl took a swipe at the tweep:

jenniferunachukwu was more concerned with the type of ladies that would date him:

“Some girls on his timeline would see this, laugh over it, and still want to date him.”

“You be monster? What happened to marrying your best friend?” 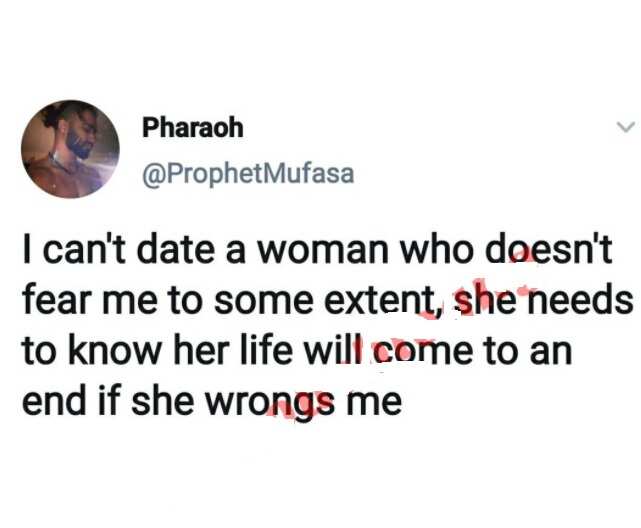 In April 2020, a young Nigerian lady was spotted on camera giving a piece of strange relationship advice to ladies. The lady advised women that if they are dating a man that does not beat them once in a while he has no love for them.

In other news, Nigerian humanitarian, Sally Suleiman has shared her thoughts about the importance of men dating withing their class.

In a recent tweet, the ivory beauty explained that men are ‘premium packages’ who should never date below their class. According to her, men who complain about women that love money should learn to date employed ladies.

At what point should a person walk out of an abusive relationship? | Bioreports