– Taking to Linkedln, the lady said the letter he gave her made her emotional and overwhelmed as they weren’t related in anyway

A lady’s seeming kindness has got her an unexpected response from her security man. The lady named Felicia Opoku-Folitse took to the Linkedln platform to share the personal letter her security man wrote her.

The unnamed security man, according to her, handed her the personal letter on the morning of Monday, February 22 just as she approached her office for the day’s work. 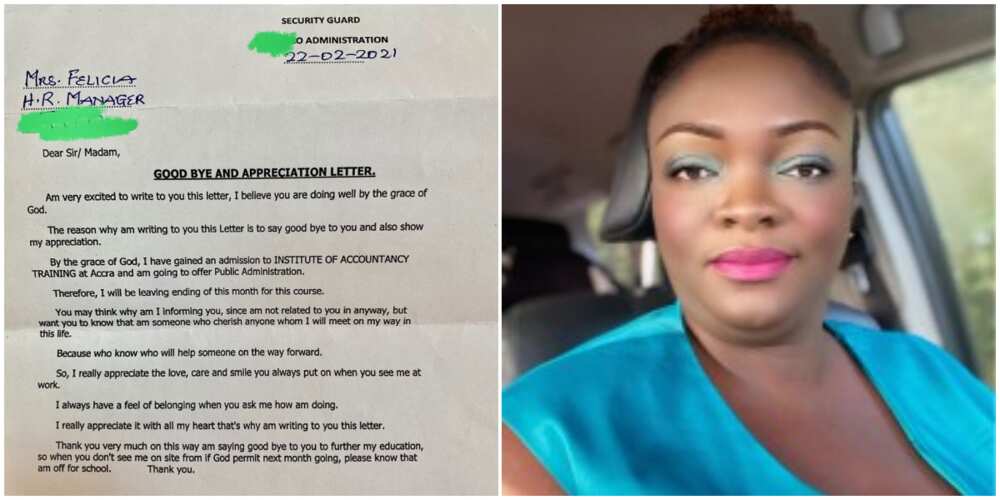 She had out of curiosity opened the letter to find out he was quitting his security job to take on his academics.

What however made her emotional in the 10-paragraphed letter was that the security man – who wasn’t related to her in anyway – appreciated her for all the care, love and kindness she showed him during the course of his work.

He said Felicia’s attitude gave him a sense of belonging and that he was very grateful for.

Felicia told her followers and connections on the Linkedln that:

“…Reading the letter made me emotional and I instantly sat down and started to reflect on a lot of things.

“One thing that kept resonating is to treat people with respect irrespective of their position/rank in life. Be nice to people and smile always as it cost nothing…”

As of time of making this report, the post had got over 3k reactions as comments poured in commending her for her kindness to the security man.

“Madam, this is so good, thank you for your heart and for sharing it across for uplifting others! Imagine from Tanzania I am reading this and feel greatly cherishing.”

”This letter tells a lot about you. A full testament of your character. Thank you for looking out for the little guys of our world.”

”A second to smile and greet is all it takes yet it goes a long way and makes that someone feel human! I live, breathe, promote this all the time and you will never believe how good it makes me feel to make that difference. Felicia, a role model after my own heart!”

Meanwhile, Bioreports earlier reported that a young man shared emotional letter his young niece left him before going to school.

In the letter which has gone viral, the unnamed young niece revealed that she had always thought her uncle, who she referred to as Abs, was her dad by reason of how he took good care of her.

She went on to appreciate him for all the kindness he has shown her and ended the heartwarming letter with an ‘I love you.’

Perdue Will Not Challenge Warnock for Georgia Senate Seat

Perdue Will Not Challenge Warnock for Georgia Senate Seat