– A young man, Jimoh, has been praised for the way he is using his yellow bus in Lagos state to pass good messages

A young Nigerian man, Jimoh, has taken public teaching to a whole new level with his yellow bus in Lagos state.

Jimoh turned the body of the vehicle into a written art that motivates. Every quote has a lesson for both his passengers and passers-by.

Though danfo buses are known for their instructional graffitis, what makes his different is that he is very intentional about it.

Unlike a single line or a few that appear on most public buses, Jimoh’s vehicle has words all over like an open book. 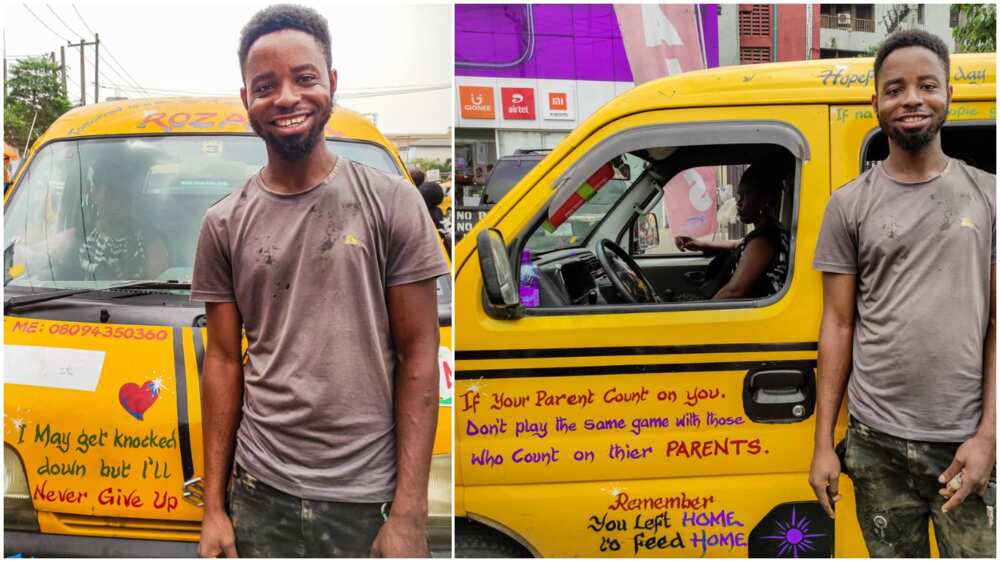 The man’s bus has been praised as a mobile wisdom dispenser.
Photo source: @tall_brown_boi
Source: Twitter

One of the inspirational quotes is:

“If your parents count on you, don’t play the same games with those who count on their parents.”

“I may get knocked down, but I will never give up.”

Whenever you are feeling down, Jimoh’s bus may just be what you need to see. A Twitter user with the handle @tall_brown_boi shared the photos of the vehicle on the bird app.

As at the time of writing this report, the post has gathered over 3,000 retweets with 7,000 likes. Bioreports compiled some of the reactions below:

“I will give this guy some free cards from @penielcards and anytime he needs a customized card, it will be done for free for him.”

“I wish one can get pictures of all these quotes… I mean the photograph of the entire bus.”

“Saw it at Ikeja today, many interesting words there.”

“This is nice, the fact that just reading one of those quotes can change a persons perspective on life.”

Meanwhile, Bioreports earlier reported that a young man transformed his luxurious bus into a cool restaurant.

Sharing photos of his creation, a Twitter account with the handle @KasiEconomy said he made the conversion for the purpose of starting a fast-food restaurant.

In the place of passengers seat, the man fixed plastic chairs with a long slab that served as a table. A section of the bus was converted into the kitchen where meals are served.