– With many distinctions, the son said that it is no wonder that his mum turned out to be a disciplinarian

– Tweeps were considered about the school’s comments on her playfulness, wondering why they were needed

A young man with the Twitter handle @fawwaz_ibrah has generated massive reactions after he posted the 1984/1985 secondary school result of his mum.

As a way to praise her mother’s excellent report sheet, the man said no wonder his mum is always so strict with him.

Looking at the screenshots of the result, the woman scored 87 in English Language, 58 in mathematics, 91 in chemistry, 82 in biology, 85 in government among other scores. 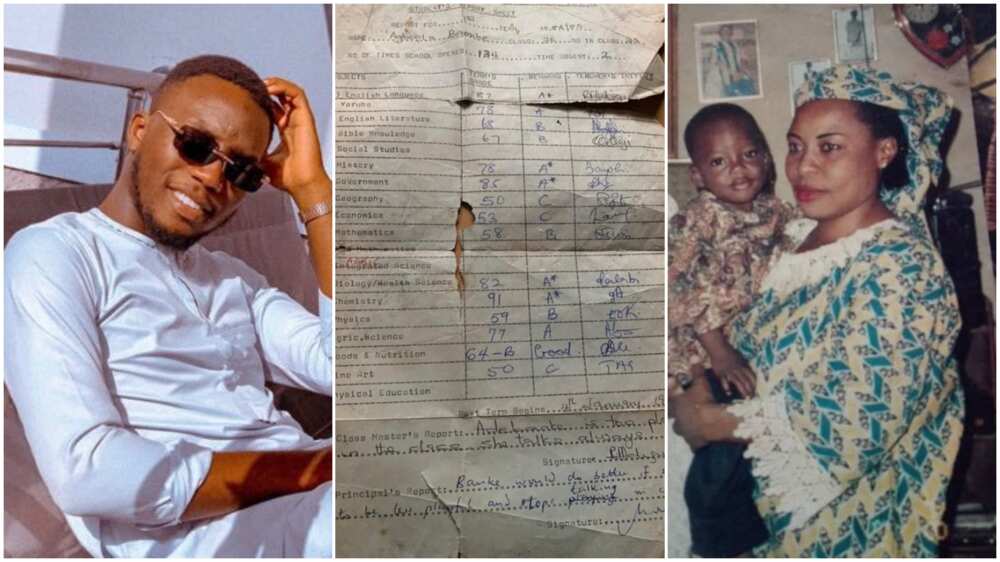 Her class teacher’s and principal’s comments, however, believed that the student could be better if she managed her playfulness.

While many were wowed by the report card, others considered the comments very unnecessary.

His post drew very interesting comments with over 16,000 likes and 4,000 retweets as at the time of writing this report.

“She’s too playful in class yet had A* in almost all the subjects… Nawa ooo..Such grace I pray for.”

“Looking at the remarks, she talked and played with her brains intact. Is a win win situation……where you carry your brain from?”

“Teachers and stupid reports, you see a result this good, you dey talk say she dey talk always lol.”

“We shouldn’t overlook the facts that her playfulness, noise making and the rest, might actually be the secret to her excellent performance. Students especially brilliant once tends to be weird.”

Meanwhile, Bioreports earlier reported that a young Nigerian man known as Kolaboy paid a visit to his mom after years of hustling in the city. He made a video and took photos of the trip.

In an Instagram post on Tuesday, November 3, 2020, the man said mothers are really priceless. The woman served him food and sat close to him as the young man feasted.

His mom kept trying to open the hood he had on his head to reveal the dreadlock but her playful efforts proved futile.