– According to a Twitter infuencer identified as Oluyemi Fasipe, the man was mistakenly arrested alongside some kidnappers

– Oluyemi said the man was shot by operatives of the disbanded Special Anti-Robbery Squad during the arrest, which led to his amputation

A Nigerian man who was allegedly sent to jail for a crime he did not commit has finally been released after spending 5 years in prison.

The disclosure was made by a Twitter infuencer identified as Oluyemi Fasipe with the handle @YemieFASH.

Oluyemi said he saw the man in court after he was discharged as no evidence could be established against him.

According to him, the man was shot by operatives of the disbanded Special Anti-Robbery Squad (SARS) during his arrest and had to be amputated. 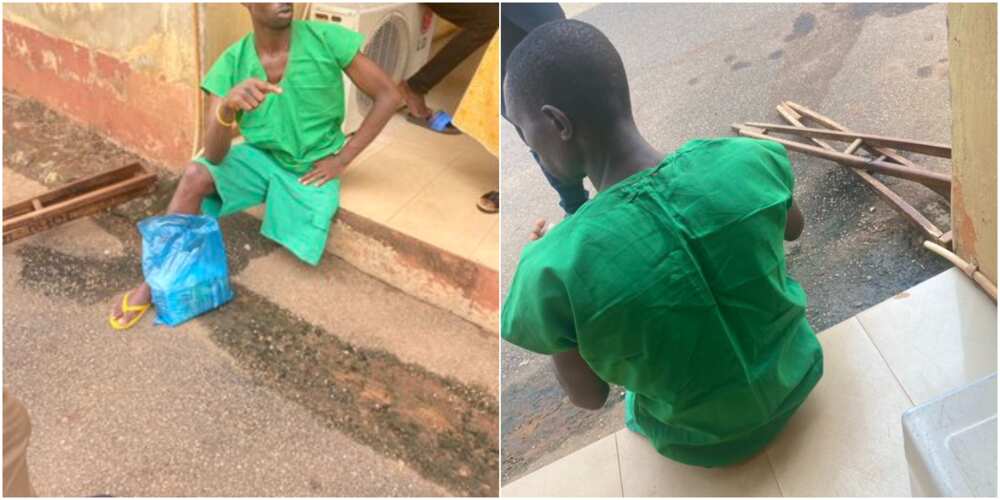 This Nigerian man allegedly spent five years in prison for a crime he did not commit.
Photo credit: @YemieFASH
Source: Twitter

“I saw this guy at the court now, he was discharged & acquitted after spending 5yrs in prison, he was mistakenly arrested alongside some kidnappers, he was shot by SARS during the arrest & had to be amputated. Imagine going through all these without committing any crime.

“I spoke with his lawyer and advised him to write a petition to the Ondo State panel of inquiry on his behalf.”

Meanwhile, Bioreports previously reported that Eromosele Adene, one of the advocates of the EndSARS campaign was granted bail by a magistrate court in Lagos state.

The Yaba magistrates court on Tuesday, November 17, set the bail at N1 million.

Adene was arrested by the police at home in Lagos on November 7 for playing an active role in the peaceful EndSARS protests.

He was accused of criminal incitement, cyberstalking, provoking a breach of the public peace, and conduct likely to cause the breach of public peace.

EndSARS: Are you willing to join another round of protests? | Bioreports

Popular actor reveals why many marriages crash, says it has something to do with what happens on the bed (photos)