– A Nigerian boy, Ashamu Lekan, has expressed his willingness to go back to school if someone sponsors his education

– Now an apprentice at a mechanic shop, Lekan dropped out of school after both his parents died

A boy, Ashamu Lekan, whose hope in life dimmed because his parents died has called for help. His cry for assistance was brought to Twitter by a man with the handle @AnatuGreen.

The man said he met the young boy at a mechanic shop where the boy is an apprentice after he dropped out of school.

According to him, the boy said he is willing to go back to school if he gets help. The man attached two photos of the boy wielding a spanner beside a tricycle.

In a short video by @AnatuGreen, the boy while working on the tricycle introduced himself in a clear spoken English language as he talked about his need for education. 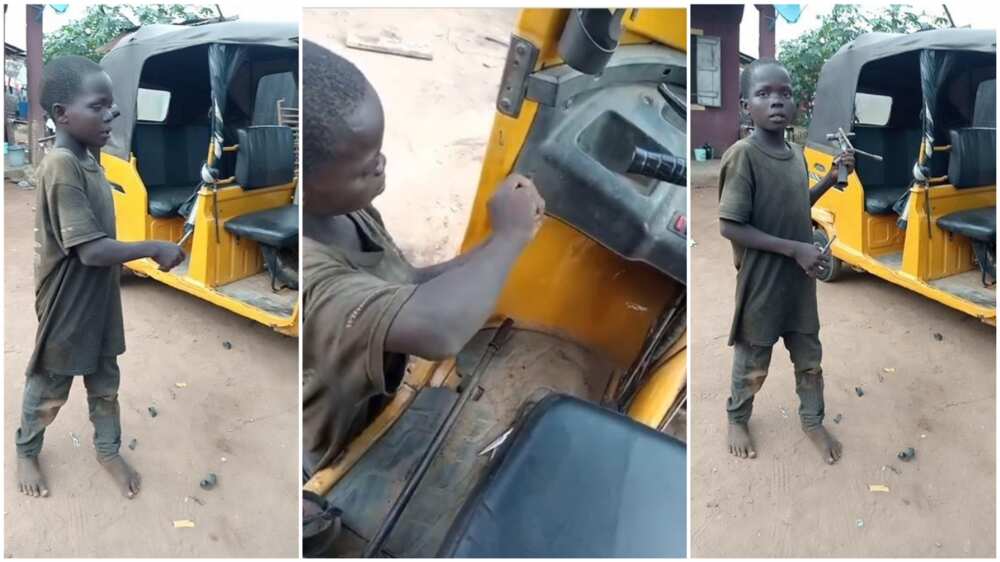 The boy said he could combine school with his mechanic apprenticeship.
Photo source: @AnatuGreen
Source: Twitter

When asked if his boss will be open to him combining school with his work, the boy said there will not be any problem with that, adding that when he is done with the school day, he could always resume at the shop.

@AnatuGreen is already working on raising funds for him. He said the mission is to put N5 million in an education trust fund so he does not have to worry about fees for years.

Nigerians had a lot to say about the boy’s ordeal. Below are some of their reactions:

“This world no balance. Fans donating for bbBioreports housemates and not for people like this. Start a go fund me for him plz.”

“The chinnese they are bringing to construct bridges in Nigeria who told you they are graduates. Most of them do not have basic education but they are doing well. We will support him by setting him up properly after completing his learning process.”

“Some people are just pure thoughtless, you went to school and somehow you are getting by, you rather condemn a child to a life of mechanic? Tomorrow you will complain of hoodlums on the streets, when the society abandoned them in their childhood.”

“Even a mechanic needs basic education like secondary school, no one will tell me otherwise. The boy wants to acquire education, let me him do it. He can continue the work some day when he’s better equipped and sharper.”

The brilliant girl is in the business of repairing heavy equipment, forklift. According to @ThepreciousAda, the teenager hopes to study engineering and add to her mechanical expertise.