– In fact, some of the pentioners were awarded N10 million for the extrajudicial killing of their loved ones

Some petitioners who received compensation of N10 million are Adebayo Abayomi for the extra judicial kiling of his mother, and Hannah Olugbodi for the being shot by a police officer among others.

Justice Doris Okuwobi (retrd) in her reccomendation also noted that erring officers who have commited these abuses are sanctioned. 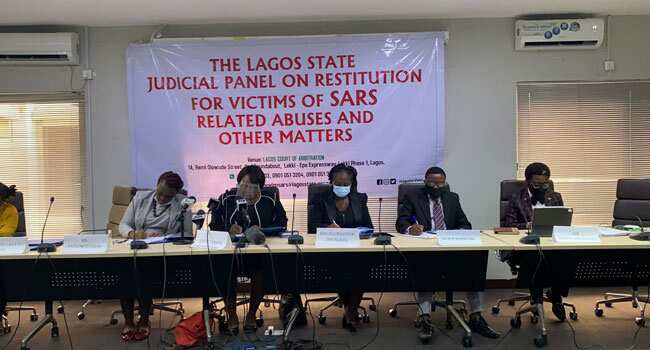 Recall that Bioreports reported that a report indicated that 15 protesters who suffered gunshot wounds during the #EndSARS protests in Lagos have presented themselves before the Lagos State Judicial Panel of Enquiry and Restitution for Victims of SARS related abuses and other matters.

14 of them were said to have been shot at Lekki Toll Gate on the evening of Tuesday, October 20, while one was allegedly shot at Ojodu Berger.

Also at the panel was one Nathaniel Solomon whose younger brother Abouta Solomon was allegedly shot dead at the toll gate.

Meanwhile, President Muhammadu Buhari declared that not under his watch will another EndSARS protest be staged by Nigerians as it happened in the month of October.

Speaking on Tuesday, November 17, during a quarterly meeting of the National Security Council (NSC), Buhari said he would not allow the repeat of the nationwide demonstration which led to the loss of lives and destruction of properties.

Muhammad Dingyadi, minister of police affairs, made this disclosure during a press briefing at the State House on the outcome of the meeting which was presided over by the president at the Presidential Villa.

Donor to Trump Inauguration Sentenced to 12 Years in Federal Inquiry

Donor to Trump Inauguration Sentenced to 12 Years in Federal Inquiry