Lady slams Igbo culture, shares video of late dad’s brothers fighting over where to bury him

A young woman simply identified as Julia has taken to her Twitter page to lament about Igbo tradition which she describes as sick.

Julia said that she has not been able to bury her late dad because his family members do not value her opinion or that of her mum as women.

Julia shared a video and it showed some of her dad’s kinsmen who were gathered at a land where the ground is being dug. According to Julia, her dad’s burial was hijacked.

According to the young woman, three different graves have been dug just because kinsmen cannot agree on where to bury her dad.

Julia said that she has not been able to grieve her dad’s death because she’s been fighting over things that shouldn’t matter.

According to her, her dad’s brothers abandoned his corpse for her in her living room and she took it to the mortuary, but, when it came to his burial, they stated that she and her mum have no say over it.

The sad woman said that her recent experience with her father’s burial is one of the reasons why she hates Igbo culture.

Explaining further, Julia said that one of the reasons that her dad’s kinsmen do not want to bury him on his own land is because the land is still new. 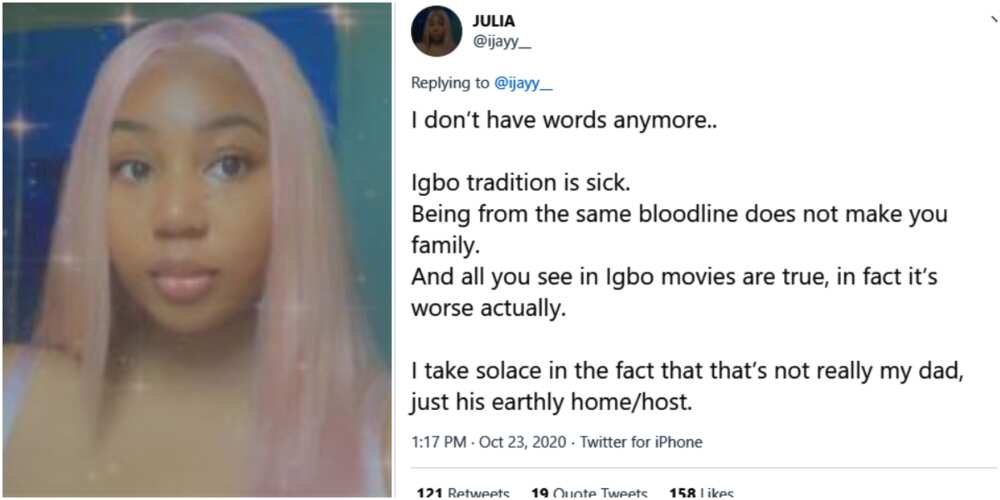 In other news, Bioreports earlier reported that a lady got people talking on social media after making a case for Igbo women.

The lady identified as @cocoh_mma said that Igbo women are the most romantic set of women in Nigeria.

While there were many who agreed with her opinion, others would not just take it as they picked holes in what they saw as a very faulty argument.