Real Madrid were stunned right at home by Cadiz as the reigning La Liga champions drop points to the newly promoted side.

It’s the first time in their history that Real will lose to the team as Zinedine Zidane’s men were stunned right in their backyard.

The only goal of the game came in the 16th minute when Anthony Lozano found the back of the net to hand the visitors all precious three points.

The Honduran slipped in and got on the end of Negredo’s through ball, lifting it over Courtois who may well ask where his defence had got to there to put is side ahead.

As at the 20th minute, Cadiz have had seven shots with four on target while the reigning champions just had Benzema’s tame effort as the only thing to warm Ledesma’s gloves.

The visitors would have gotten the second goal in the 29th minute but it was goalkeeper Thibaut Courtois who came to the rescue again as Lozano hits a low shot on target after a glorious ball from deep from José Mari.

Los Blancos came close in the 37th minute when Varane popped up unattended in the melee and hits a header just wide of the post, as Zinedine Zidane got desperate for the equalizer.

Again Cadiz came so close in the 42nd minute as they kept in search for a second goal. An innocuous cross was not dealt with by Courtois and the ball fell to goal scorer Lozano.

He wasn’t really expecting it and fluffed a shot from close range – and that was it in the first half as the visitors went into the break the happier side.

The second half looked more promising for Real Madrid and Vinicius almost grabbed the equalizer three minutes in when his shot Vinicius hit Benzema and spinned over the bar. 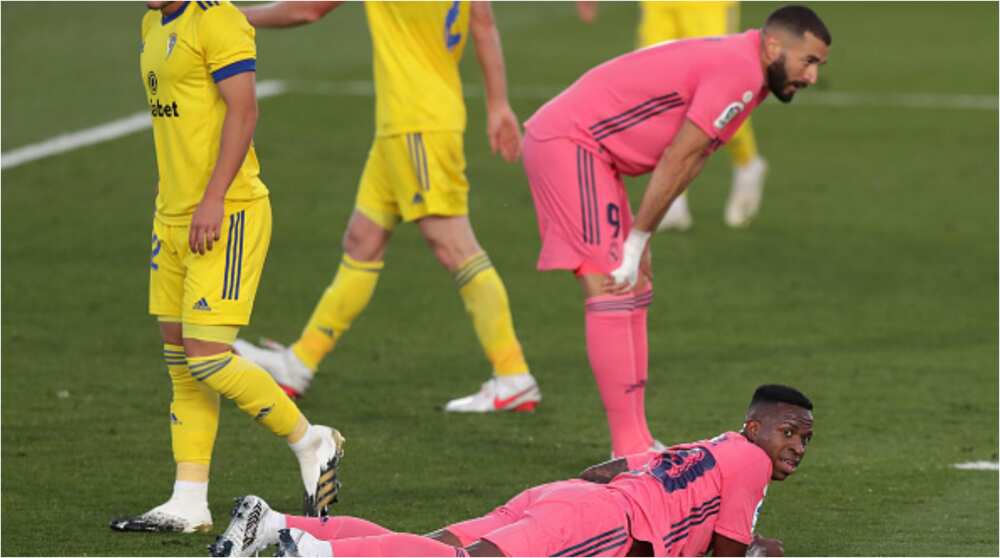 But it was the hosts that escaped again after a scruffy ball was poked towards goal with Courtois rooted to the spot, but the ball went inches wide.

Real got a goal in the 79th minute when Jovic had the ball in the net but Benzema was clearly offside when he nodded across the box to the Serbia striker. And it was ruled out.

And there was no much action as it ended Real Madrid 0-1 Cadiz.

Meanwhile, Bioreports earlier reported that Paul Pogba who earlier declared interest in playing for Spanish champions Real Madrid is having the backing of his team-mates at Old Trafford club Manchester United.

The 27-year-old Frenchman recently declared interest in joining Zinedine Zidane’s side during the international break.