In a swift response to the threats asking Bishop Mattew Hassan Kukah to apologise or “quickly and quietly leave” Sokoto state, the presidency on Wednesday night, January 13, responded in deference of the respected cleric.

The Muslim Solidarity Forum (MSF), a society based in Sokoto, had on Tuesday, January 12, said the message of the cleric was a direct attack on Islam and then asked him to leave.

Speaking through its acting chairman, Isa Muhammad Maishanu, the group also stressed that Bishop Kukah is fanning embers of religious violence, though the cleric in question has “as a matter of honour” challenged MSF to show where he attacked Islam or Muslims. 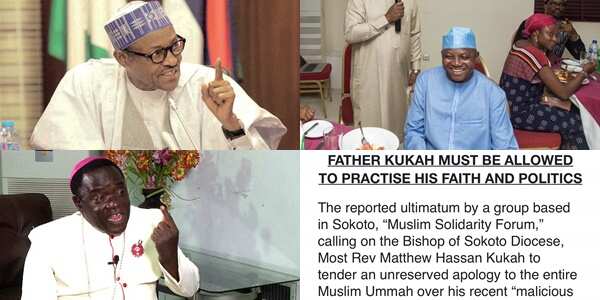 Presidency said Bishop Kukah has protection under the constitution to practise his faith and politics.
Credit: @NGRPresident @GarShehu
Source: Twitter

But in a rub-hitting response to the threats by MSF, a media aide to President Muhammadu Buhari, Garba Shehu, said Kukah “has the right” to freedom of speech, among other protection under the law.

1. Kukah should be allowed to practise his faith and politics

According to the presidential aide, to threaten Bishop Kukah is wrong because it is not in line with the constitution of the Federal Republic of Nigeria.

“Under our Constitution, , the right to own property and reside in any part of the country, and the right to move freely without any inhibitions.”

2. Respect rights and sensitivity of Nigerians

Garba Shehu said “the right for all religions to co-exist” must be respected, while rights and feelings of Nigerians must also be respected.

3. Kukah offended many with controversial remarks

Although the statement was meant to defend Kukah, presidency insisted that the cleric’s remark is controversial, offending many people.

“Father Kukah has greatly offended many with his controversial remarks against the government and the person of the President, with some even accusing him of voicing anti-Islamic rhetoric.”

Shehu said it is the duty of responsible leadership in any society to exercise restraint. Shehu said:

“Knee-je’rk reactions will not only cause the fraying of enduring relationships, but also the evisceration of peaceful communities.”

Meanwhile, the Christians Association of Nigeria (CAN) has reacted to the call for Kukah to apologise for his statement, describing the threats of MSF as laughable.

The general secretary of CAN, Rev. Joseph Daramola, said the respected cleric spoke within the limits of his fundamental human rights.

“What do they want to do to him? Are they going to prosecute him? Are they suing him to court? Why would he apologise? Do they have the monopoly of right? How can they ask a whole consecrated Catholic bishop for that matter to come apologise for airing his opinion?”

Governor Samuel Ortom has backed the position of Bishop Mattew Kukah, saying Nigeria is not well.

The Benue state governor warned that attempts by the federal government to “whip into silence” speakers of truth will not take Nigeria to a greater height.

Ortom commended the bishop for speaking the mind of Nigerians, adding that he is not the first person to nail the truth by the edge.