– The rapper said he wanted a public apology from J. Cole and Drake while referring himself to Nat Turner

Born again US rapper Kanye West has once again caused a stir on Twitter with his comments regarding fellow musicians and himself as one of the biggest names in Hip hop.

On Monday, September 15, the rapper went on Twitter airing some of his grievances which included not releasing more music. 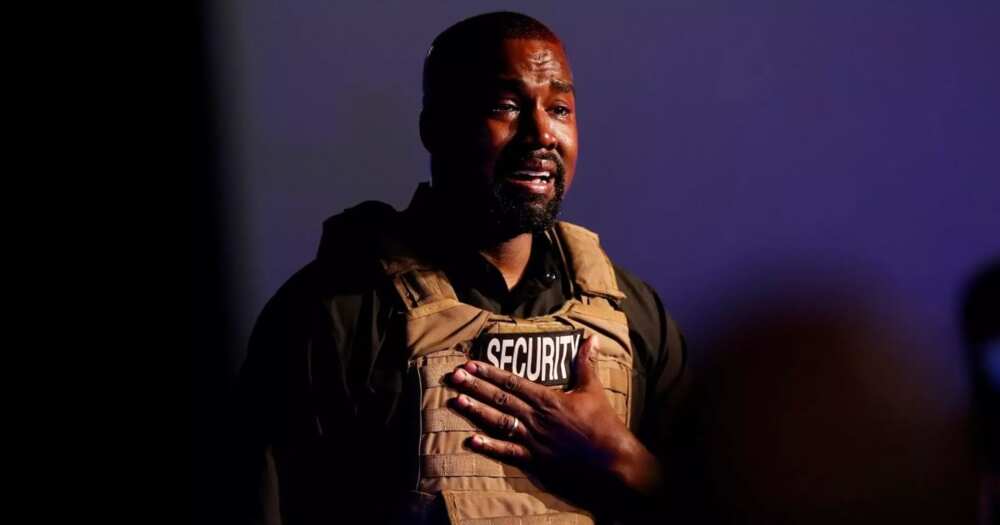 Kanye West filled with emotions at a past presidential rally Photo: Insider
.

The reason for this was that he was to wait until he’s out of contract with Sony and Universal adding he was not going to watch his people be enslaved, and called himself the ‘new Moses.’

“I need to see everybody’s contracts at Universal and Sony, I’m not gonna watch my people be enslaved. I’m putting my life on the line for my people. The music industry and the NBA are modern-day slave ships. I’m the new Moses,” he wrote.

Kanye went on a rampage about other music labels before demanding an apology from rappers J. Cole and Drake while referring to himself as Nat Turner, a black man famously known as a slave rebellion leader back in the 1830s.

“I need a public apology from J Cole and Drake to start with immediately, I’m Nat Turner, I’m fighting for us,” he said.

Kanye also labeled himself the second richest black man in America and revealed he was waiting to meet Shawn Carter – government name for Jay Z, before apologising for writing his name as Sean.

The musician then changed a bit and started offering advice to fellow ‘brothers in the industry’ saying they needed healing and he had the utmost respect for them.

He urged them to stop killing each other and spread love adding he did not want to argue with them because be had nothing but love.

This is the second time in just two months that the rapper has gone on a Twitter storm with the last one involving his wife and extended family.

Back in July, the rapper claimed his wife, Kim Kardashian, was trying to lock him up with the help of her mother Kris Jenner.

In another tweet, he warned Kris not to play with him saying she and that ‘calmye’ (her boyfriend) were not allowed near his children.

Kim later explained that her hubby was struggling with bipolar and she wanted him to seek medical help as it was complicated for her since he was an adult and can decide on his own.

Kanye later publicly apologised to his wife saying he was remorseful for the way he embarrassed and disrespected her.

How we settle quarrels in Mavin records – Ladipoe | Bioreports

Kayode Idowu Unless something gives in the brewing test of will over recent increases in domestic price of petrol and...