– Nigeria vs Sierra Leone is slated for Friday evening, November 13

The crucial encounter is slated for the Samuel Ogbemudia Stadium in Benin on Friday, November 13 from 5pm local time.

Sunday Dare and Amaju Pinnick trained with the squad on Thursday evening as the team map out their final strategies ahead of the encounter. 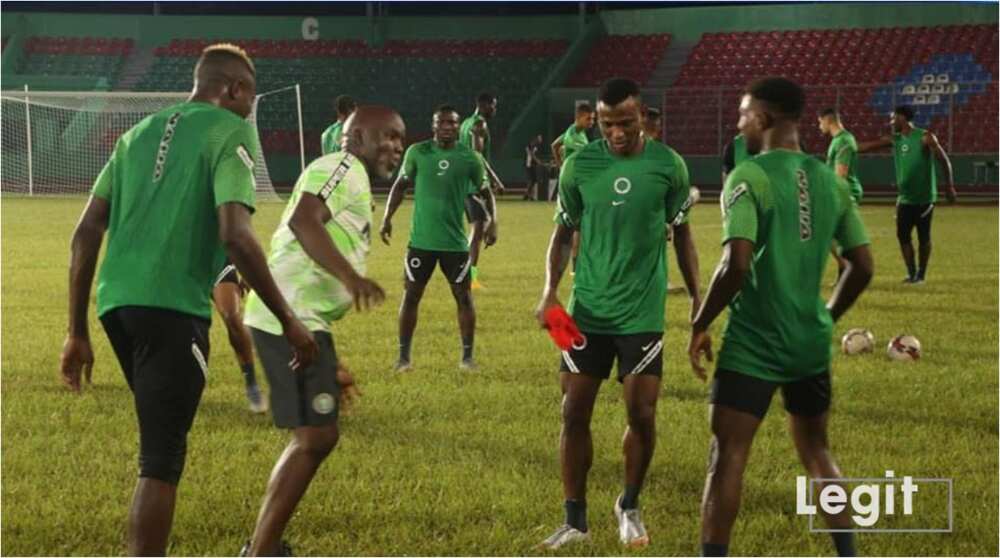 Nigeria vs Sierra Leone cracker will go down at the Samuel Ogbemudia Stadium in Benin.
Photo: Emmanuel Osodi
Source: Original

Both football stakeholders took their time to participate in the warm-ups and stretch-outs as the entire team once again expressed their level of togetherness.

Shaibu is a football pundit as well as a footballer and he is instrumental for Bendel Insurance’ return to the Nigeria Professional Football League.

Ahead of the Nigeria vs Sierra Leone game, he joined the Super Eagles in training as they play the ‘middle-man’ game with himself in the middle attempting to get the ball.

The Nigerian team camp is already bubbling with the arrival of a number of stars from Europe.

It was gathered that all invited players for the encounter are already in camp and team manager Gernot Rohr had assured that his team will secure maximum points.

On the other hand, a 42-man delegation of the Leone Stars landed at the Murtala Mohammed International Airport, Lagos on Wednesday afternoon. November 11, aboard ASKY airline from Freetown before flying on a chattered flight to Benin.

Sierra Leone are desperate to get their 2021 AFCON qualification campaign back on track after amassing just one point from their opening two games.

Meanwhile, Bioreports earlier reported that Maduka Okoye has been reportedly favoured to be in goal for the Super Eagles of Nigeria.

Gernot Rohr and his wards have for the past four days been training at the Samuel Ogbemudia stadium in Benin ahead of their 2021 AFCON qualifier against Sierra Leone.

The last time Nigeria lost at home against Sierra Leone was 19 years ago in a 2002 World Cup qualifying match as Super Eagles went on to qualify for the game.

I wish you all the happiness you deserve, man celebrates ex-wife on her birthday

I wish you all the happiness you deserve, man celebrates ex-wife on her birthday