Spanish outlet La Razon via Tribal Football are claiming that the Red Devils are looking to edge Real Madrid to the signing of the 21-year-old to the Old Trafford.

Ole Gunner Solskjaer’s side has failed in signing their major target Jadon Sancho from German side Borussia Dortmund and now they are considering a bid for Chukwueze. 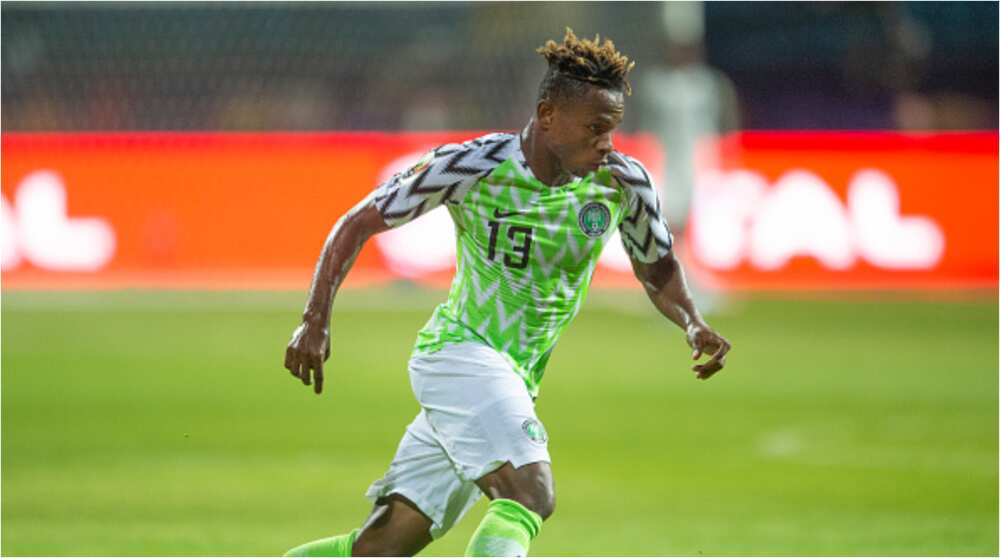 Samuel Chukwueze could be playing at the Old Trafford next season.
Photo: Visionhaus
Source: Getty Images

It was also gathered that Liverpool boss Jurgen Klopp is also interested in the youngster who already has 17 international caps for Nigeria scoring 3 goals. Chukwueze once said:

“Playing in England is still an ambition for me.

“I need to keep on working hard and to keep improving. I really want to play in England. I think so.”

The Villarreal winger won a penalty for his side during their 1-1 draw with reigning La Liga champions Real Madrid on Saturday, November 21.

He made a run into Los Blancos danger zone in a bid to connect with a pass from his teammate but an attempt to save the ball boomeranged for the Belgian goalkeeper.

Moreno’s goal, however, cancelled Mariano Diaz’s early minute strike to ensure both sides shared the spoils at the end of the game.

Real Madrid are now fourth on the table with 17 points after nine rounds of games as they prepare for their Champions League meeting against Inter Milan, while Villarreal are 3rd on the standings with 19 points from 10 games.

Meanwhile, Bioreports earlier reported that Alex Iwobi was instrumental to Everton’s fifth win in the Premier League as they narrowly defeated Fulham by 3-2 at Craven Cottage.

Carlo Ancelotti’s side dominated the first half but had to defend in most parts of the second period to secure the victory.

The Nigerian international won some balls and made a few interceptions especially when Fulham were in control of the game in the second half.

My father dressed like a king: Wizkid on how his dad inspired his love for fashion (video)

How did you get this number? Joe Biden's wife asked in 1975 before their love story began; here is what she did after the phone conversation